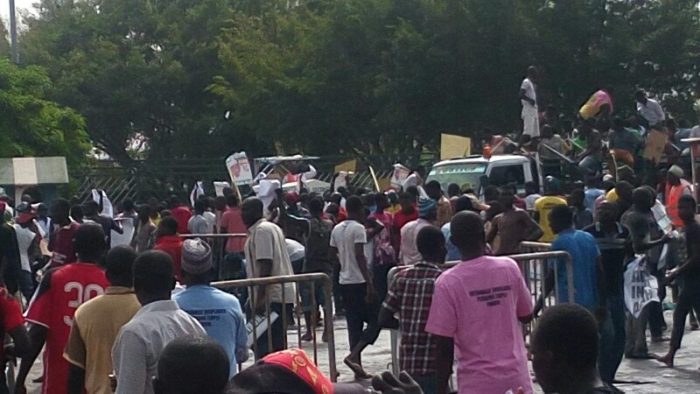 Thousands of protesters have blocked the entrance to the National Assembly in Abuja, demanding the immediate reinstatement of Ali Ndume, senator representing Borno south in the Senate.

Mr. Ndume was suspended last week by the Senate for triggering investigations into allegations of forgery against the senate president, Bukola Saraki, and Kogi senator, Dino Melaye.

Mr. Melaye was accused of falsely claiming to have graduated from Ahmadu Bello University.

The Senate dismissed both allegations, and sanctioned Mr. Ndume by suspending him for six months.

There have been moves by Borno politicians to get Mr. Ndume reinstated.

Protesters arrived the National Assembly gate early Tuesday, with placards lambasting Mr. Saraki and the Senate.
“Saraki is a curse”, one placard read.

Many of the protesters said they were natives of southern Borno, Mr. Ndume’s district, but mostly live in Mararaba and Masaka areas of Abuja.

A PREMIUM TIMES’ correspondent at the scene said the protesters did not immediately appear like the usual “rented crowd”.