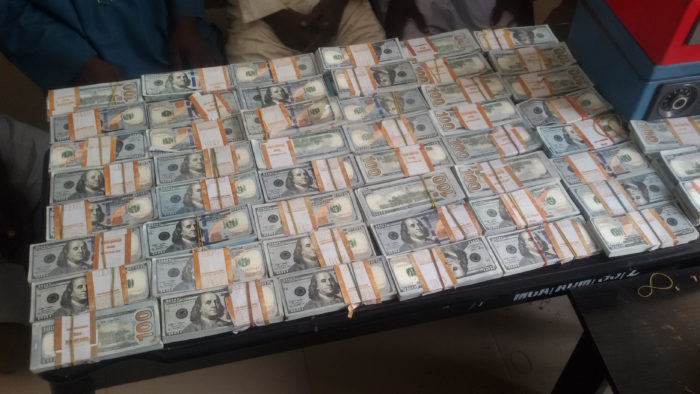 The Kaduna Zonal office of the Economic and Financial Crimes Commission, EFCC has arrested members of a notorious syndicate of fraudsters made up of four Nigerians and one Nigerien who specialise in duping innocent persons of their hard earned monies and recovered $570,000 fake US Dollars.

He said a search of their hideout which is suspected to be a kidnappers’ den led to the startling discovery of a sum of $570,000 fake US dollars and some charms.

The EFCC said the five-man gang met their waterloo when they conspired among themselves to lure an unsuspecting victim into believing that some unclaimed boxes containing huge amount of USD were kept with some herdsmen believed to be accomplices by an unidentified politician.

“Doubtful of the story, the would-be victim contacted the Commission. The operatives of the Commission upon receipt of the intelligence swung into action and arrested the gang members in their hideouts. All the suspects are in custody while investigation continues,” he said.

The Commission warned members of the public to be wary of any get-rich-quick offer in order not to be a victim of scam.

It added that those who had fallen victim to the nefarious activities of this syndicate were enjoined to report to the Commission’s office located at No.4 Wurno Road Kaduna State.