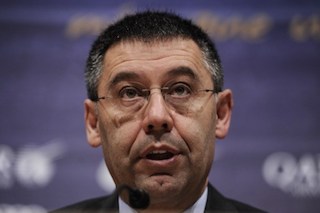 The coach of Spanish third division side, Eldense, Filippo di Pierro, has been arrested by Spanish police investigating allegations of match-fixing.

The Italian coach was arrested after his side’s 12-0 defeat by Barcelona’s B team on Saturday.

There is no indication Barcelona B were involved in any wrongdoing.

Di Pierro, who joined the club in January, was hired by an unnamed Italian investment group that has since severed ties with the club.

The following day the club said they would not play any more matches this season, but later backtracked and confirmed the fixtures would be honoured.

In an interview with Spanish radio station, Cadena Ser, Eldense defender Emmanuel Mendy said the club’s assistant coach, Fran Ruiz, had spoken to him about a plan to fix the game.

“He asked me if I was in and how much I wanted and if I wasn’t in then I wouldn’t play,” said Mendy.