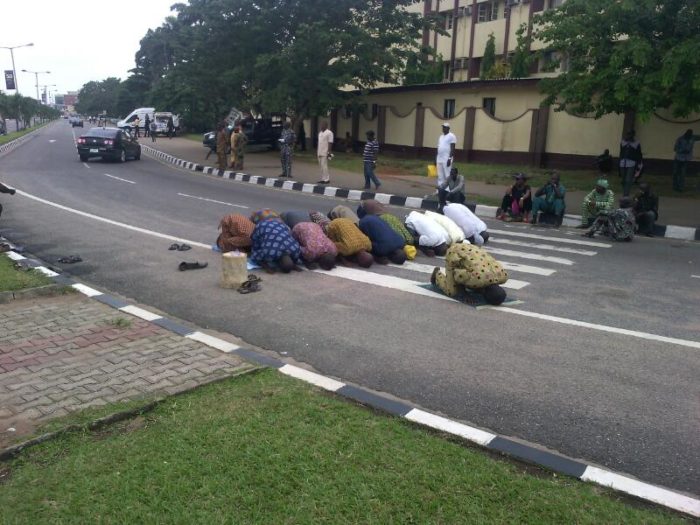 Some of the protesters praying on the road

Hundreds of ex-councilors, supervisors of Local Governments and Local Council Development Areas, LCDAs in Lagos and others staged a protest at the Alausa seat of power on Wednesday to protest the non-payment of arrears of salaries, amounting to about N1.2 billion.

Some of the ex-councilors and supervisors turned the road leading to the Deputy Governor’s office to praying ground as they observed their afternoon prayer right on the busy road.

The protesters then took over the dual carriageway leading to the deputy governor’s office and prevent vehicular movement, while police officers did not resist them.

When it was around 2pm, the Muslims among the protesters observed their afternoon prayer on the toad as no vehicle was allowed to pass through the road.

The protesters said during the era of former Governor Bola Tinubu, when President Olusegun Obasanjo seized the state’s statutory allocation as a result of the creation of 37 Local Council Development Areas, LCDAs, they were being paid stipends, with a promise that when the allocation was released, they would be paid the balance.

They lamented that after the money had been paid by the late Umaru Yar’Adua administration, successive governments in Lagos State refused to pay them the money amounting to about N1.2 billion.

They decried that many had died waiting for the unpaid salaries by the state government, just as the protesters raised the alarm that three of their members had threaten to commit suicide due to their present predicament as they were financially incapacitated.

Spokesperson of the protesters, Adewale Benson, lamented that the State had enough in its coffers to pay their salaries.

“We expect that the State Governor will pay us. Just recently, the Federal Government released N14 billion to Lagos, as their share from the Paris fund. This is what other states that did less than Lagos used in offsetting their unpaid salaries. We expect Lagos State Governor, Akinwunmi Ambode, to also do same for us.

“I can tell you today that Ogun State Governor, Ibikunle Amosun, offset salaries of former political holder in the state and heaven did not fall. Also, Governor Seriake Dickson of Bayelsa State, few weeks ago, cleared the backlog of salaries of ex-political office holders. If all these states could embark on such, why not Lagos that makes over N20 billion monthly as Internal Generated Revenue (IGR),” Benson added.

Deputy Majority Leader of the Lagos State House of Assembly, Olumuyiwa Jimoh, who addressed the protesters said the issue was long overdue but that the lawmakers did not have the responsibility to clear the fund, but the executive.

Jimoh appealed to the protesters to exercise patient, saying that: “we have recommended that their severance and other unpaid entitlement should be paid urgently. But the only hurdle to their money was Revenue Mobilization, Allocation and Fiscal Commission (RMAFC), recommendation on 2004-2007.

“The recommendation did not capture their service time and that implies that their benefits were not included in the report. Our own is to recommend to the executive but it is the governor’s duty to implement the recommendation.”