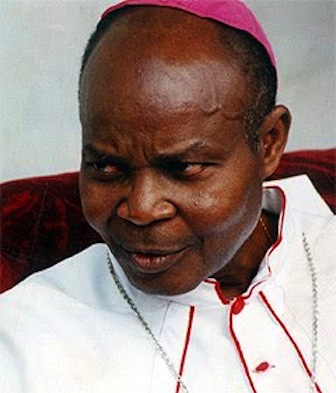 Worried by the current face-off between the Executive and the Legislative arms of Federal Government, Anthony Cardinal Okogie, the Archbishop Emeritus of the Catholic Archdiocese of Lagos, has urged the country’s leaders to put the interest of the citizenry above personal interests.

Okogie said the executive and legislative arms should come together and work for the development of the nation.

According to the cardinal, the leaders must assume the responsibility of governance by securing the land from those he called armed robbers, kidnappers and herdsmen.

“Our politicians are busy fighting one another, exchanging blows in the hallowed chambers of legislation, resorting to character assassination.

“Our law enforcement institutions have been turned into their arsenal in this battle of the sanctimonious; the executive accuses the legislature of corruption and vice versa.

“Both parties in the conflict pretend to be fighting for us, they are fighting to guard the “trophy” they won at the last election while preparing to retain the same trophy in the next election.

“They are so busy fighting that they have no time to work for our security. Their sterile conflict is, in fact, prejudicial to our security.

“Their negligence of duty, their tantrums, their failure to be transparent and accountable with very few exceptions, point to the fact that they are part of the equation of insecurity in our country,’’ Okogie said in a statement.

Okogie called on political leaders to provide infrastructure and adequate security for the citizens.

He noted: “Our leaders are well protected, but we the citizens are not. Political leaders who cannot provide security are a total failure.

“Almost six decades after independence, almost 70 years after the establishment of Nigeria’s premier University of Ibadan, we still have to rely on medical tourism.

“But how many poor Nigerians can afford to spend one day in a hospital overseas. How many can afford to be away from their work for three months.

“But Nigerians have the capacity to run good hospitals. All we just need is a leadership that enables, not one that disables.

Okogie called on Nigerians to be responsible in the business of protecting and safeguarding their own lives and property.

“Does the life of the Nigerians have any value. If it does, can it be truly said that Nigerians appreciate the value of life. The questions are meant for all of us.

“We all have to take responsibility for the protection of lives and property of the citizens in this country. We live in clear and present danger.

“We are not safe when we are at home, neither are we safe away from home.

“Life runs the risk of being cut short by armed robbers, kidnappers, dangerous drivers driving on dangerous roads, driving cars that are dangerous for transportation.

“When we thought we were gaining the upper hand in the battle with Boko Haram, violent herdsmen stare at our helpless faces,” said the retired catholic archbishop.

While reminding leaders that one day they would give account of their stewardship to God, who made them leaders, Okogie pointed out: “One thing is clear: almost all our political leaders are either Christian or Muslim. The two religions teach that we shall one day account for our earthly stewardship.

“Every leader will stand before the “Just Judge” (God) and account for the way he or she got into positions of authority and used the authority.

“Propaganda in the print and electronic media will be of no assistance, lies told to get elected and falsehood peddled to remain in office will be of no value.”