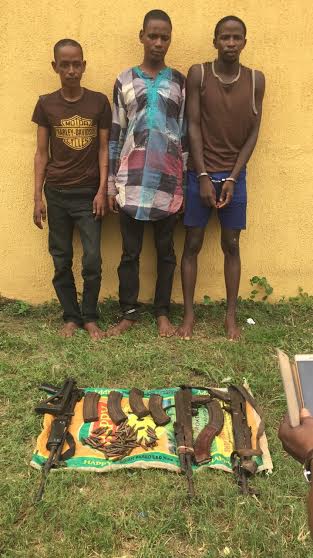 The three suspects who kidnapped a Dangote staff recently on parade

The Kaduna State Police Command has announced the arrest of 19 people suspected of engaging in kidnapping, armed robbery and other crimes in the state.

The Commissioner of Police, Mr Agyole Abeh, made the announcement at a press briefing in Kaduna on Monday.

He explained that among the suspects were five kidnappers, six armed robbers, seven receivers of stolen property, and a fraudster.

“We recovered 24 plate number of cars, five Toyota and two Honda cars, as well as one locally made pistol and three cutlasses from the suspects,” he said.

The police commissioner said all the suspects would be charged to court as soon as investigations were concluded.

The commissioner assured that the command was committed to bringing down the level of crime in the state, “to attract more development to our society.”

Abeh appealed for more public cooperation and support to enable the police achieve its mandate.