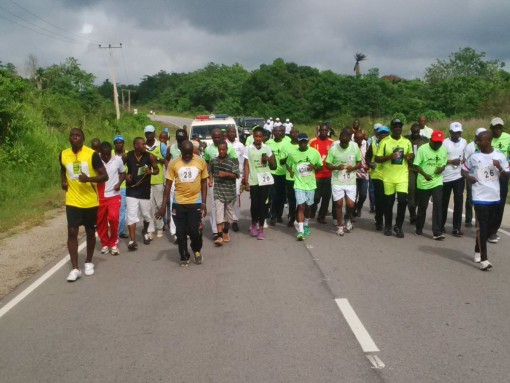 Organisers of the 10-kilometre Okpekpe International Road Race, have urged Nigerian athletes to take advantage of this year’s competition to enable them get the label to participate in other international marathons.

A director of organization of the organising company, Pamodzi, Mr. Zakari Momodu, made this appeal in Benin on Wednesday, while explaining the level of preparedness of the organisers to the state Deputy Governor, Mr. Philip Shaibu.

He said certificates to be issued to participants in the race will qualify them to run in any marathon organised by the International Association Athletics Federation (IAAF), anywhere in the world.

Momodu also disclosed that Transponders have been introduced to the race to eliminate cheating by athletes who may cut-corner by entering the race track through the bush.

He said that the device has been internationally used and was brought into the competition by Mylaps Sports Timing for Netherland.

To ensure that participants in the race would enjoy clean air during the race, Momodu announced that motorbikes have been outlawed from the premises of the race.

Earlier in his speech, the Managing Director of Pamodzi, Mr. Mike Ituamagbor, stated that Okpekpe Marathon was the first labelled race in Nigeria and sub-Sahara Africa.

He disclosed that athletes from 11 countries are expected‎ to participate in this year’s edition of the race.

He disclosed that an App technology has also been introduced for online registration of intending participants as well as advertise partners of the race.

According to the organisers, accreditation of athletes for the race will hold between May 11 and 12 in Auchi.

Meanwhile, the State Deputy Governor, Mr. Philip Shaibu, has announced that he would run for eradication of Cancer in this year’s edition of Okpekpe International Road Race.

“I am running for Cancer, I am running that Cancer‎ be eliminated. I am sure that one day, the vaccine for the cure of Cancer will be discovered,” Shaibu said.

He expressed joy that the organizers of the race were taking the issue of doping seriously, saying “it means that if you are coming, you are coming clean.”

The Deputy Governor while urging all other sports to emulate the example, congratulated the organizers of the Okpekpe race for ‎introducing App technology into the race, adding “it is real.”