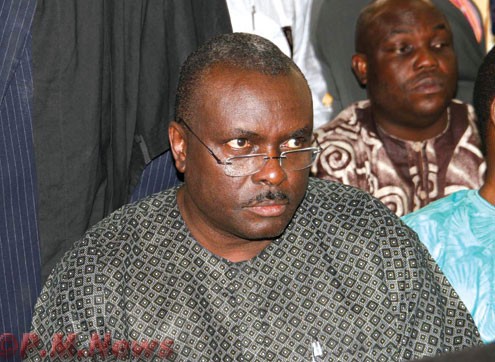 Former governor of Delta, Chief James Ibori on Saturday received a delegation of Ndi Anioma led by Dr Emmanuel Efeizomor, the Obi of Owa, and Chairman, Delta Council of Traditional Rulers, in his home in Oghara

Ibori commended the Delta North (Anioma) people for the visit and for their prayers which made freedom possible.

Ibori said his support for governor from Delta North, which saw the emergence of Gov. Ifeanyi Okowa, was based on justice, equity and fairness.

He said the massive support he received from the Aniomas in his quest for governorship in 1998 prompted his choice of an Anioma indigene as his deputy.

According to Ibori, “my believe in justice, equity and fairness informed my firm support for an Anioma governor which has come to pass with Gov. Ifeanyi Okowa on the saddle.”

He promised to continue to identify with Anioma people and urged them to remain united and support Okowa to succeed.

Earlier, the Owa monarch had commended Ibori for his disposition to advance the political course of Anioma people.

He said that the five years absence of the former governor was greatly felt by Deltans, particularly the political class and members of the Peoples’ Democracy Party (PDP).

The monarch added that Ibori’s return would change the political landscape of the state ahead of 2019 elections.

He said that Ibori had closely related with the Anioma nation, having chosen Chief Benjamin Elue as his deputy in his eight years in office as governor.

He recalled the role played by the former governor in the emergence of Okowa as governor of Delta and particularly thanked him for endorsing the governor for a second term.

Efeizomor thanked God for the safe return of Ibori, describing him as an invaluable asset to the state and country.

He urged him to see his travails in London as a sacrifice towards deepening democracy in Nigeria and assured him of the continued support of Anioma people.