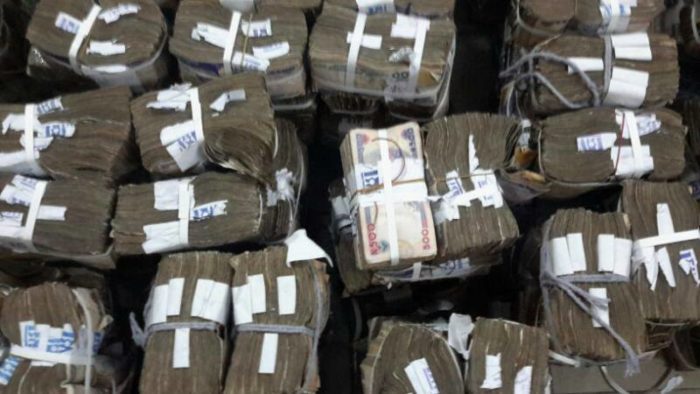 A Federal High Court sitting in Ikoyi, Lagos State southwest Nigeria Wednesday ordered temporary forfeiture of N449,750,000 found in possession of one Mohammed Tauheed to the Federal Government of Nigeria.

The order was sequel to an exparte application filed by the Economic and Financial Crimes Commission (EFCC) lawyer ,Rotimi Oyedepo Iseoluwa.

In an affidavit sworn to by an EFCC operative Mr Moses Awolusi, the deponent averred that EFCC received an intelligence report on 7 April that money in several Ghana-must-go bags were warehoused in one of the shops located at Legico Shopping Plaza, at Victoria island, Lagos.

On 7 April, 2017, the shop number LS64 at Legico shopping Plaza, Ahmadu Bello Way Victoria island was searched and a sum of N449,750,000 was found in different bags popularly known as Ghana-must-go.

The inquiries on the ownership of the shop where the exhibit was recovered indicated that the shop had not been opened for close to two years.

The Chairman of Bureau De Change Operators at the plaza, Mr Sulaiman Mukthar Daba and Vice Chairman Alhaji Ishaq Ayandiran could not identify the owner of the shop, but came to the EFCC with Mohammed Tauheed, who claimed ownership of the money and informed the EFCC that he received the money in cash from a serving government official whose name he will not disclose for security reasons.

Thereafter Mohammed Tauheed in the presence of his lawyer agreed to return the money back to the Federal Government of Nigeria who is the rightful owner of the money.

The said money recovered was reasonably suspected to be proceeds of crime fraudulently diverted from the Federal Government of Nigeria.

Mohammed Tauheed who was arrested in connection with the money criminally conspired with the owner of the aforementioned shop now at large to launder the said funds.

The presiding judge, Rilwan Aikawa after listening to the submissions of Mr Rotimi Oyedepo granted order of interim forfeiture of the money to the Federal Government of Nigeria.

The court also ordered EFCC to advertise the order of the court within 14 days for any interested party to come before the court to convince the court why the money should not be permanently forfeited to the Federal Government of Nigeria.