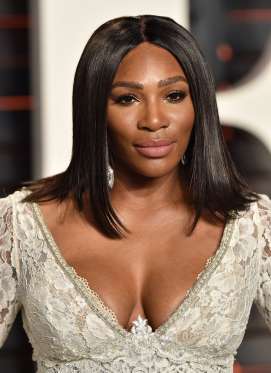 Tennis superstar Serena Williams revealed on Wednesday that she is pregnant, posting a photo of herself in a yellow one-piece bathing suit on the social media site Snapchat with the caption “20 weeks.”

The 35-year-old, who will return to the No. 1 ranking in the world next week, deleted the photo shortly after it appeared, and she had not commented further several hours later.

A representative for Williams declined to comment on whether the post was a confirmation that she is pregnant.

If Williams is indeed 20 weeks into her term, that would mean she was approximately two months pregnant when she captured her record 23rd Grand Slam tournament title at the Australian Open in January.

Her victory over older sister Venus Williams broke a tie with Steffi Graf for the most Grand Slam singles championships in the sport’s modern era. Serena Williams has not played since, citing a knee injury.

Fans and celebrities reacted with a mixture of awe and glee to Williams’ Snapchat post.

“Serena Williams was pregnant when she won her 23rd grand slam tournament at the Australian Open. And did not drop ONE SET. Let that sink in,” wrote Twitter user @noelleharmony.

“So Serena cheated,” Trevor Noah, the host of “The Daily Show” on Comedy Central, wrote on his Twitter account. “Because that’s technically a doubles match.”

A spokeswoman, Amy Binder, said the tour had not received any confirmation from Williams.

Tennis’ U.S. governing body, the United States Tennis Association, wrote on Facebook, “Join us in congratulating the GOAT and her fiancé Alexis Ohanian on this incredible news!” referring to Williams with the acronym for “Greatest of All Time.”

A pregnancy would likely end the 2017 season for Williams, who has not played since her Australian Open win, citing a knee injury.

The next Grand Slam tournament this year is the French Open, which starts in May. If Williams is 20 weeks pregnant and gives birth after a full term, she would have her child in early September, during the fourth Grand Slam, the U.S. Open in New York.

Other women have left the tour to have children and returned at a high level, though none has done so at Williams’ age. The Belgian player Kim Clijsters retired and had a child before coming back at age 26 and winning three Grand Slam titles as a mother.

Former No. 1 Victoria Azarenka of Belarus, 27, missed most of the 2016 season to have a baby and is expected to return to the tour this summer.

Williams is the oldest woman to win a Grand Slam singles title and still dominates the tour at an age when most players have retired.

Williams, who has played professionally for two decades, first gained the No. 1 ranking in 2002 and has held that spot for more than six years in total during her career.