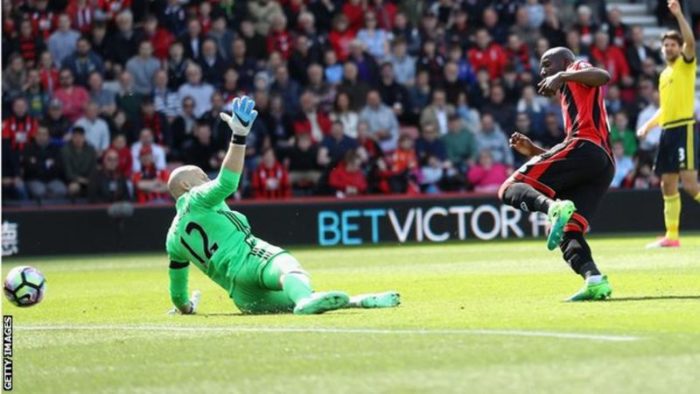 Bournemouth score one of their goals

Middlesbrough’s hopes of avoiding relegation suffered a major setback as they lost heavily at Bournemouth after playing for 70 minutes with 10 men.

Midfielder Gaston Ramirez was sent off for two bookable offences after 20 minutes – one for diving and another for a reckless challenge on Marc Pugh.

They were already trailing 2-0 after Joshua King had scored from close range just 96 seconds into the match and then Benik Afobe converted from Charlie Daniels’ pass.

Marc Pugh’s curling effort made it 3-0 and Daniels added the fourth.

Middlesbrough’s relegation could be confirmed as early as next weekend.

They entertain Manchester City on 30 April and if they lose that – and results go against Steve Agnew’s team between now and then – their return to the Championship after one season will be confirmed.

Boro needed to win at the Vitality Stadium. Instead, they were embarrassed during a self-inflicted defeat and are now 16 league games without a win.

Pugh was afforded too much space to cross for King to break the deadlock so early in the game, while Middlesbrough’s defence was caught out by Daniels’ clever pass for Afobe to double the lead.

Ramirez’s red card was inexcusable. The former Southampton player deservedly got a yellow card for diving inside the Cherries’ penalty area before needlessly hacking at Pugh.

Marten de Roon did force a fine save from Artur Boruc, but Bournemouth cruised to three points after the interval.

Pugh marked his 250th league appearances for the Cherries by making it 3-0 after a wonderful pass from Lewis Cook, before Daniels skipped around a couple of challenges and rifled home from 20 yards, BBC reports.