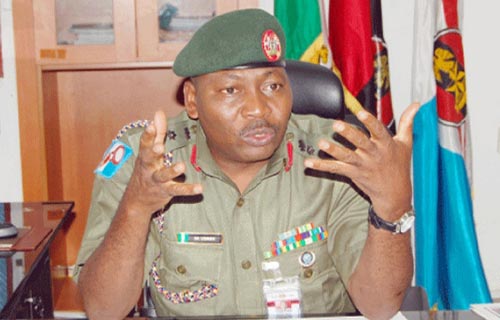 The Nigerian Army in collaboration with operatives of the Department of State Service (DSS) said they have arrested two suspected thugs and recovered some arms, ammunition and other items in Anambra.

Col. Sagir Musa, Deputy Director Public Relations, 82 Division, Nigerian Army, Enugu made the disclosure in a statement made available to the News Agency of Nigeria (NAN) on Sunday in Onitsha.

“Following intelligence report, Operatives of the DSS, Anambra Command and a patrol team from 302 General Support Regiment Onitsha, successfully carried out a Cordon and Search Operation on three identified locations.

“In the three areas that were searched, specifically, in building number 8, Chukwunonso Ndulue Street in Graceland Housing Estate, Nsugbe near Onitsha, two suspects were arrested,” he said.

Musa said items such as seven pump action guns, 44 Cartridges, one hunter knife and two cutlasses were recovered from the suspects.

According to him, the three mentioned communities have been engaged in hostile land and chieftaincy dispute which led to the gruesome murder of three civilians allegedly by suspected thugs.

Musa explained that the areas had been under security surveillance for sometime now and that was the basis for the Cordon and Search operation in the localities.

He said the suspects and exhibits would be handed over to the police for further investigation.

The deputy director urged members of the public, especially in the affected communities, to continue to give useful information and report any suspicious movement of person or object to security agencies.

Tags:   The Department of State Service (DSS)   The Nigerian Army