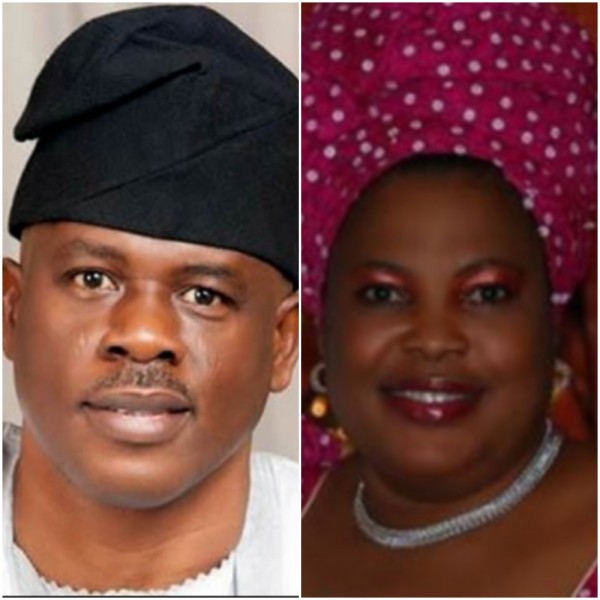 Obanikoro and one of his wives Moroophat

A Federal High Court in Lagos on Monday struck out a suit by a former Minister of State for Defence, Senator Musiliu Obanikoro, against the EFCC over its seizure of his properties.

The other applicants are: Obanikoro’s wife; Fati, his sons Gbolahon and Babajide and his wife, Moroophat.

Obanikoro and his family had sued the commission through their lawyer, Mr Lawal Pedro (SAN), seeking a court’s declaration that the forceful seizure of their personal effects constitutes a gross violation of their rights.

The applicants had prayed the court for an order to set aside the forceful seizure of their properties on June 14, 2016.

They had demanded an “unreserved public apology”, as well as seeking the award of N100million as general damages against the commission, as well as an order restraining the EFCC from arresting them or entering their premises again to seize their properties.

Besides, the applicants had also raised queries on the mode of execution of the search warrant; on grounds of irregularities, and had urged the court to declare the searches conducted therefrom, as unlawful.

Meanwhile, the EFCC (respondent) had opposed the application urging the court to strike it out for lack of merit.

Delivering judgment on Monday, Justice Abdulazeez Anka upheld the contention of the respondent and accordingly struck out the application.

Anchoring his decision on a plethora of judicial authorities, Justice Anka held: “The learned silk for the applicant seemed to have delved into the issue of search warrant at the hearing of the preliminary objection before the substantive suit proper.

“The learned SAN seemed to have cautiously or otherwise, argued the substance of the main suit by attacking the search warrant at the stage of preliminary objection.

“At the stage of a preliminary objection, the court ought to avert its mind to whether it has jurisdiction to entertain the action. In any case, the court will reluctantly flow with the tide in other to address the issues raised.

“The gist of the applicant’s case as contained in the affidavit in support is that the EFCC which is investigating the offence of fraud involved in the Office of the then National Security Adviser(ONSA),discovered large sums of monies paid into various companies whose signatories are the third and fourth applicants.

“Subsequently, the commission applied to a Lagos State Magistrates’ Court for a search warrant of the applicant’s house, with a view to recovering the incriminating items that will aid its investigation.

“The said warrant was said to be executed in the presence of the first and second applicants as exhibited in Paragraph 9 of the affidavit in support of the preliminary objection, and items and documents recovered are as contained therein.

“What I can deduce from the argument of the learned SAN is the alleged illegality of the search, as well as evidence adduced; the question, however, is whether at this stage, the court can be justified in declaring the said search as unlawful.

“It is my view that the EFCC has the statutory right to investigate and prosecute offenders and in the process searches are imminent.

“In my view, the legality or otherwise of the searches as well as evidence obtained can be taken up and thrashed when such issues come up for hearing.

“The respondent has exhibited a certified true copy of the search warrant which was obtained from the magistrate court of Lagos, as well as documents recovered.

“Hence, parties ought to sheath their swords until such evidence are adduced in court when parties will have opportunities of objecting to the admissibility of evidence.

“Approaching the court three days after such search is conducted in other to quash same, will in my view, amount to pre-empting the possible outcome of the criminal trial which is yet to be embarked upon.

“This application to declare the search and seizure of properties illegal, is in my view, akin to pre-empting objection to the admissibility of a document in the main suit.

“In the light of the above, I hold that the preliminary objection succeeds; this application is hereby struck out.

“Parties have a right of appeal, and I so hold,’’ he ruled.

The commission had claimed that Obanikoro received suspicious payments from the ONSA through companies linked to the family.

For instance, the commission said that about one million dollars was transferred from the ONSA to Mob Integrated Services on March 18, 2015.

The applicants, however, claimed that the commission violated Regulation 13 of the EFCC (Enforcement Regulation) 2010 which provides that it shall “apply and obtain” a court order to enter and search any premises.