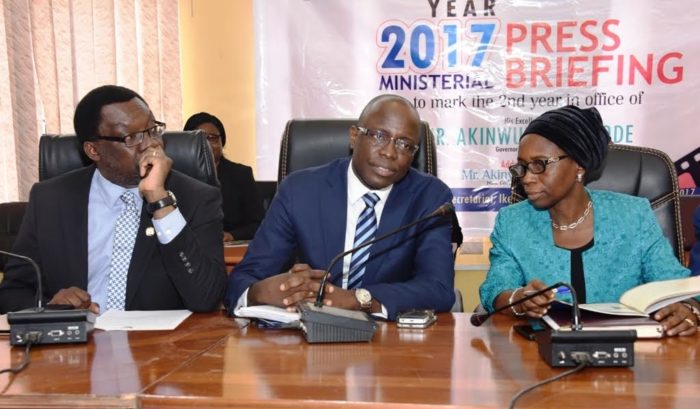 Ashade, who spoke at a ministerial press conference on Monday in Alausa, Lagos, Southwest Nigeria the fund generated by the current administration exceeded what was raked in 2015.

“In 2016, the existing strategic financial management framework of the State’s resources was steadfastly sustained and this resulted in steady improvement of the State’s revenue. A total revenue of N436.328 billion was realized in the 2016 compared to N399.382 billion in 2015.

.On Land Use Charge, LUC, the commissioner said in the last one year, more payment channels were introduced to cater for the large number of people that needed to pay the charge, saying that in some cases, banks were encouraged to establish their presence at Tax and Revenue centers, including LUC centers to reduce incidence of cash transaction and attendant frauds that might arose.

He stated that the innovations and public awareness campaigns adopted by government had drastically increased the state’s LUC revenue generation from N6.156 billion in 2015 to N7.156 billion in 2016, disclosing that in the first quarter of 2017, LUC collections stood N3.99 billion.

However, Ashade said the Land Use Charge Assessment Appeal Tribunal, set up by government would continue to provide opportunity for the public in resolving LUC issues by mediation instead of going to regular courts.

“In the year under review, the tribunal treated over 500 cases. 195 of those cases were resolved amicably and payments made immediately by the property owners, while the others which involved minor amendments to the bills were also resolved amicably.

On the Lagos State Bond Issuance Programme, Ashade said the government had continued to utilise the Domestic Capital Markets to raise funds in line with its vision of using sustainable budgetary deficit arrangements to grow the State’s GDP.

“In line with our medium to long term finance strategy, the N500 billion Bond programme was established in December 2016 with the N47 Billion bond being its first tranche raised from the Capital Market. We are at an advanced stage in line with 2017 Appropriation Law to approach the capital market for Issuance of N100 billion bond in series 11 through book building subject to regular provisions.

“While the State Government is pursuing the N500 billion Bond Programmes, it has continued to ensure a strong and healthy debt sustainability regime leading to Improved Local and International ratings for the State and its Debt Instruments. In February, 2017 Fitch Ratings (An International Ratings Agency) affirmed the Long-Term National Rating at “AA+” (ang) with a stable Outlook.

“Sequel to the approval of Lagos State Government Development Policy Operation (LSG) DPO III by the Federal Executive Council and in compliance with conditions precedent to draw down, the World Bank approved the disbursement of the third tranche of USD 200 million facility in April 2016 to the State. The State Government has been servicing its external debt consistently with the Debt Management Office (DMO) in Abuja, deducting at source from the State Government Statutory Allocation to effect repayment of both local and foreign loans,” he stated.