Trump Should Revoke the Visas of Corrupt Nigerian Rulers 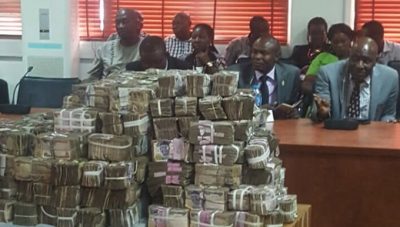 Some of the bribe money recovered from INEC officials by EFCC

On April 12, Nigeria’s principal anti-corruption agency, the Economic and Financial Crimes Commission (EFCC), announced that it had found $43.4 million stashed in a vacant apartment in Lagos. The cash was in U.S. dollars, British pounds, and Nigerian naira.

The EFCC did not reveal the owner of the cash—if it even knows. The EFCC said its seizure was the result of a tip-off under a program whereby the whistleblower received 2.5 percent of recovered funds. The Federal High Court in Lagos has ordered the temporary forfeiture of the cash.

The developer of the building where the cash was stashed is Adamu Muazu, former chairman of the Peoples Democratic Party (PDP), which governed Nigeria from 1999 to 2015 during the presidencies of Olusegun Obasanjo, Umaru Yar’Adua and Goodluck Jonathan. Muazu was also the governor of Bauchi from 1999 to 2007.

In response to media speculation that he owns the stash, Muazu stated that he is a property developer who built the building and sold all of the apartments through a real estate agency, and that he has no knowledge of the money. However, the media says that sale of the apartments is still underway and that Muazu has reserved the penthouse for his own use.

The media also reports that according to one source, the apartment where the cash was found is owned by a daughter of Anthony (‘Tony’) Anenih. A former minister, Anenih was also a former chairman of the board of trustees of the PDP.

In 2009, a Nigerian senate committee investigated the use of N300 billion (Roughly $2 billion.) in the transport sector. It recommended prosecution of thirteen former ministers, including Anenih. Later that year, the senate deferred indefinitely consideration of the report; it is now a dead letter.

Meanwhile, the PDP governor of Rivers state, Nyeson Wike, is telling the media that the money belongs to his state. He says that his immediate predecessor as governor, Rotimi Amaechi, stole the money to finance the All Progressives Congress (APC) 2015 election campaign. Wike and Amaechi are political enemies. Amaechi is serving as minister of transport in President Buhari’s APC cabinet. Amaechi is accusing Wike of resorting to “fake news.”

In yet another wrinkle, the director general of the Nigeria Intelligence Agency claims that the money belongs to his agency, and that it was intended for “covert” operations. The media is skeptical of his claims because of the apparently disorganized way the money was scattered about the apartment.

On the other hand, on April 19 Nigerian media reported that President Muhammadu Buhari had suspended the director general of the National Intelligence Agency, Ambassador Ayo Oke, pending a full-scale investigation into his activities with respect to the $43.4 million stash.

In what may, or may not, be a related development, he also suspended the secretary to the government of the federation, David Babchir Lawal, in conjunction with contracts related to the Presidential Initiative for the Northeast. The investigation of both, with a two-week deadline, is headed by Vice President Yemi Osinbajo.

The bottom line is that $43.4 million has been recovered, with claims or insinuations that it was stolen by highly connected officials in one or the other of Nigeria’s two principal political parties and possibly involving somehow the Nigeria Intelligence Agency.

The secretary to the government of the federation and the director general of the National Intelligence Agencies are at the pinnacle of the Nigerian government, and Buhari has made the fight against corruption a central theme of his presidency, hence the suspension and the investigation. It would seem that there is a real swamp to be drained.

Allen Grane and I have recently written a Council Special Report urging the Trump administration to make support of anti-corruption efforts by the Nigerian and South African governments a priority. Among the recommendations Grane and I made in our report was that the U.S. Department of State revoke the U.S. visas of political figures suspected (not necessarily proven) of kleptocracy. The individuals involved in this episode might be a place to start.

John Campbell is the Ralph Bunche Senior Fellow for Africa Policy Studies at the Council on Foreign Relations.