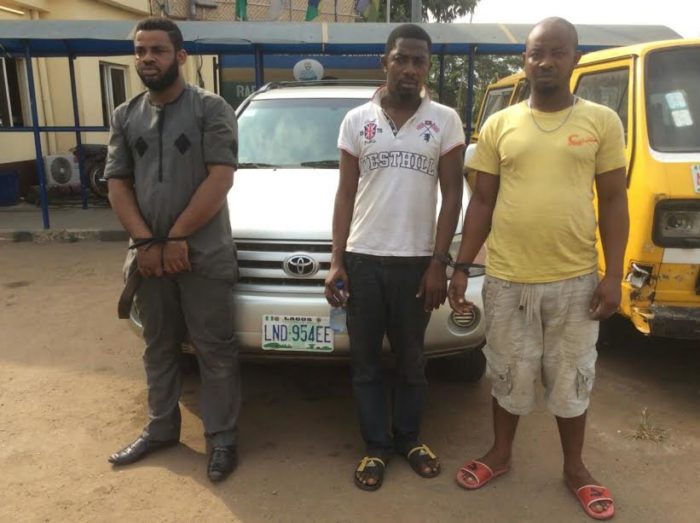 The operatives of the Rapid Response Squad, RRS, of the Lagos State Police Command over the weekend arrested three suspected kidnappers fleeing from Ibadan to Lagos after collecting N3 million ransom.

The kidnappers had after collecting the ransom fled to Lagos. The police in Ibadan after discovering that the kidnappers were heading to Lagos with the victim’s Toyota Highlander had radioed Lagos for assistance.

RRS officials on receiving the radio signal tracked the vehicle to Femi Shrine in Ikeja, from where the alleged suspects further moved the vehicle to a compound somewhere Abule Egba, Lagos.

It was there that, the officers arrested a suspect before recovering the Toyota Highlander, 2005 model with the registration number LND 954 EE.

The first suspect assisted the police in the arrest of another suspect who was later apprehended at Fela Shrine in Ikeja while another suspect simply identified as Theophilus is on the run.

According to one of the suspects, Adekunle Funsho, a fashion designer around Felele, Ibadan, where it was believed the kidnapping took place, “Theophilus handed over the car to me in Ibadan and told me to look for a buyer for the car.

“I brought the car to Lagos because I know that I would get a buyer quickly for the car. The instruction from him was that I sell the Highlander at N800, 000”.

He stated further: “I got a buyer In Ondo State. He has bought a car from me before, a fairly clean Toyota Corolla. He bought it N550, 000:00. I took the car to him on Lagos – Ibadan Expressway, where he paid me before moving the car away.

“Charles is my friend of over 5 years. We met at Redeemed Church, Ogba, where I was a chorister. I gave him the car to help me warehouse it for me to get a buyer. He took the car from me at Fela Shrine to his house in Abule Egba.”

The case has been taken up by Oyo State Anti-kidnapping team for further investigations.