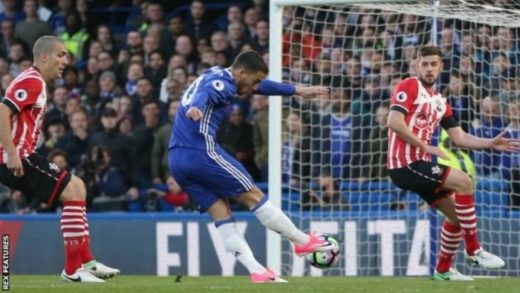 Chelsea restored their lead at the top of the Premier League to seven points with a convincing win over Southampton at Stamford Bridge.

Antonio Conte’s side had seen their advantage cut by Tottenham after the Blues’ loss at Manchester United – but this was an emphatic response to follow on from Saturday’s FA Cup semi-final win against their London rivals.

Eden Hazard and Diego Costa were both back in the starting line-up after Wembley and were key figures, the Belgian putting Chelsea ahead with a low shot after five minutes.

Former Chelsea midfielder Oriol Romeu bundled in an equaliser for Saints before Gary Cahill headed the title pace-setters back in front right on half-time, a moment that effectively decided the destination of the points.

Costa confirmed Chelsea’s supremacy with a header early in the second half before scoring his second with a low shot late on.

Ryan Bertrand, another former Chelsea man, was on target in the dying seconds – but the victory was secured for Conte’s men and now Spurs must respond at in-form Crystal Palace on Wednesday (20:00 BST kick-off), BBC reports.