Lagos To Expand Rice Mill At Imota to 16 Metric tonnes 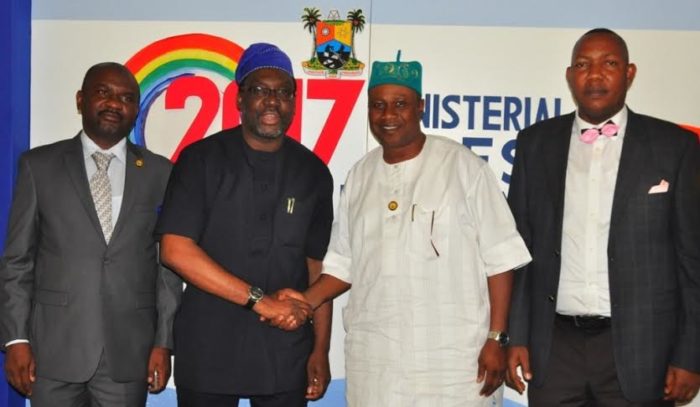 The Commissioner for Agriculture, Mr Oluwatoyin Suarau disclosed this on Tuesday at the 2017 Ministerial Press Briefing of the Ministry of Agriculture to commemorate the second year in office of Governor Akinwunmi Ambode led administration in Lagos State.

Suarau posited that as part of effort to increase food supply and ensure food security in Lagos State, the government, through the Ministry of Agriculture was vigorously implementing the State’s Strategic Food Security Plan with programmes and projects that had remarkable impact on food security in the State.

He pointed out that the collaboration between Lagos and Kebbi States on the development of commodities such as rice, wheat, groundnut, onions, maize/sorghum and beef had yielded positive fruits resulting in the launch of LAKE rice on 21 December, 2016.

The commissioner added also that no fewer than 100 farmers through the FADAMA III additional financing programme were producing rice at Itokin in Epe Local Government in furtherance of the state government’s effort to engage youths and boost rice production in the state.

“In all, rice cultivation has so far improved in the State from less than one ton per hectare to about three tons per hectare with double cropping in some areas where irrigation facilities are provided”, he said.

Suarau, while restating the commitment of the Ambode-led administration towards the attainment of food security in the State, said that food security was in the front burner of the present administration’s policies to facilitate job and wealth creation as well as poverty reduction.

The commissioner revealed that the state government was intensifying efforts to establish additional farm estates in Eluju-Mowo and igbodu respectively to foster Public-Private Partnership, PPP, arrangement, adding also that effort to set up a cattle fattening estate in Imota through PPP was on course.

“This Estate Initiative is subsequent to the effort of government to address the various challenges facing agriculture in the State such as declining land for agricultural activities, encroachment by land speculators as well as promoting the utilisation of agricultural land for its intended purposes”, Suarau stated.

He said that the state government had continued its advisory services to farmers and fisher folks across the state through the farm service and entrepreneurship centre.

Suarau added that the farm service centre approach had been very helpful in providing assistance in all technical areas of agriculture and building capacity for interested farmers, school leavers, retirees and professionals intending to invest in Agriculture.

He stated that the government was also not relenting in its Rural Finance Institution Building Programme and School Agricultural Programme, adding that the State was strengthening its Agricultural Extension Services and animation to improve farmers’ productivity while the Cage Culture system which had the potential of contributing to poverty reduction through improved food security, enhanced protein consumption, income generation and job creation was accorded the desired priority.

Also speaking, Special Adviser to the Governor on Food Security, Mr. Ganiyu Okanlawon said the government was committed to working with the private sector to facilitate food security by harnessing public and private investment to create a strong, mixed sector economy that could provide jobs for all and create the base for expanding social services and environmental sustainability.

“Agriculture has the highest demonstrated potential for job and wealth creation and it is against this background that the agricultural sector should be one of the key instruments of achieving this laudable dream,” he said.

Okanlawon noted that the government would develop the coconut value; a strategic initiatives to develop an expanded structure for coconut production and processing in the State through PPP arrangement as a means of generating employment, wealth creation and food security.

“In order to redress the food security challenges of the State, the government, through the Ministry of Agriculture hosted a world-class Food Security Summit to attract organisations that seek to partner with the State government in the realization of the Food Security Agenda”, he said.