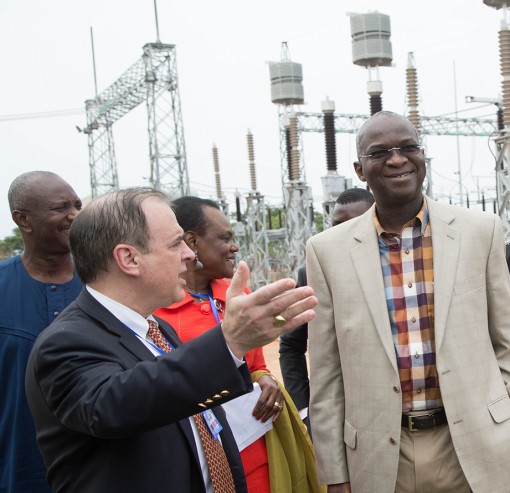 Hon. Minister of Power, Works & Housing, Mr Babatunde Fashola, SAN (right), being welcomed by the Managing Director of Enugu Electricity Distribution Company, Mr Robert Dickerman to the Third Monthly Meeting of the Minister with Sectoral Participants in the Power Sector at the Ugwuaji Transmission Station, Enugu

The Association of Electricity Distribution Companies (ANED) has appealed to the Federal Government to provide the N100 billion subsidy it promised after private investors took over the power sector utilities on November 1, 2013.

ANED, in a statement by its Executive Director, Mr Sunny Oduntan also appealed to the government to inject funds into the transmission section of the sector.

It said that the inadequate funding of the TCN was responsible for the huge loss and rejection of electricity load .

According to the statement , government which holds 40 per cent equity in the utilities, had pledged to provide many interventions in the Performance Agreement between DisCos and the Bureau of Public Enterprises (BPE).

“To date, the government has not met the privatisation transaction foundational requirements of providing N100 billion in subsidies, payment of MDA electricity obligations.

”It has not ensured that the DisCos have debt free financial books; and the implementing of a cost reflective tariff,” it said.

It said that the funding level of TCN was inadequate, given TCN’s estimate of 7.5 billion dollars for its five-year expansion plan designed to increase its capacity to wheel 10,000 megawatt (mw), from the current 4,500mw.

The statement said that the DisCos could only recover their costs when they have more energy delivered by TCN in the area where they have customers.

According to the statement, it is unfair for the DisCos to suffer financial losses due to the limitations associated with TCN’s wheeling of electricity.

It said TCN, a public utility, has remained underfunded over several decades.

“Such underfunding has resulted in poor transmission infrastructure and planning, with the consequences of grid instability and limited wheeling capacity, adversely impacting the distribution and generation of electricity.”

It said that the inadequate funding of TCN was impeding the DisCos’ ability to distribute power and has led to crashes in power turbines of Generation Companies (GenCos) due TCN consistent requests for de-loading.