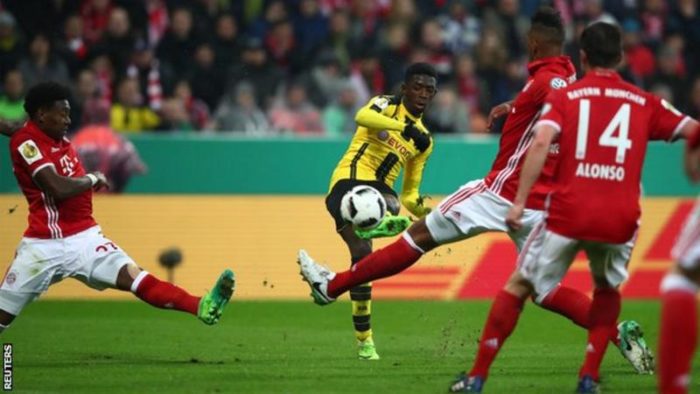 Dembele struck with just over 15 minutes to play to set up a final against Eintracht Frankfurt
photo: BBC/Reuters

Ousmane Dembele’s brilliant second-half strike took Borussia Dortmund through to the German Cup final as they came from behind to beat Bayern Munich.

Marco Reus had put Dortmund ahead, before Javier Martinez’s towering header and Mats Hummels’ tidy finish gave Bayern a 2-1 lead at the break.

Pierre-Emerick Aubameyang brought Dortmund level, before Dembele curled into the top corner with 15 to play.

Thomas Tuchel’s side go on to play Eintracht Frankfurt in the final.

Frankfurt, who are ninth in the Bundesliga, beat Borussia Monchengladbach on penalties in the other semi-final on Tuesday.

The final will be held at Berlin’s Olympiastadion on 27 May, BBC reports.