Lawal and Oke as Glamour News 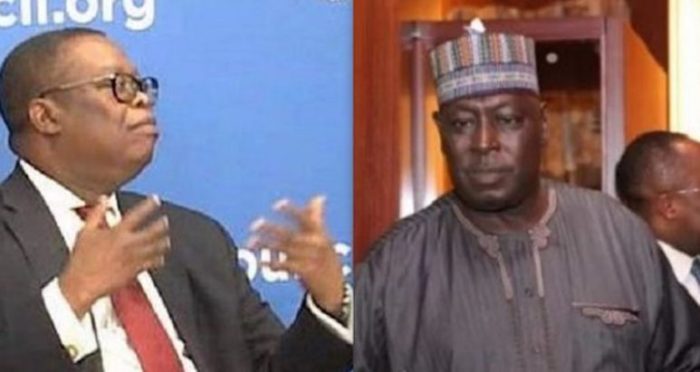 What happened to these indicted officials. Ambassador Ayo Oke and Babachir Lawal, suspended

These indeed, are interesting times. They are also good times for news hunters. These days, the whole place is saturated with news in different moulds and dimensions. There is plenty of news in circulation every day to the extent that it takes an editor with good news judgement to decide what the lead story of his paper would be from the plethora of news items available to pick from.

While the ink with which a particular breaking news item is written is still dripping, several other news items of compelling nature keep tumbling in, in quick succession. They come in different shapes and sizes, from the sublime to the ridiculous. Surprisingly, most of the news items usually emanate from the corridors of power and government agencies.

Last week was particularly busy for the media. Work had just started after the Easter holiday when, suddenly, there was bedlam in the presidency following the directive by the president that Babachir David Lawal, the all-powerful Secretary to the Government of the Federation (SGF) and Ayodele Oke, the Director-General of the National Intelligence Agency (NIA), be suspended. Both of them had been respectively accused of legal and due process violations, as well as the discovery of large amounts of foreign and local currencies by the Economic and Financial Crimes Commission (EFCC) in a private, residential apartment in Ikoyi, Lagos.

The suspension order on the two principal officers of government came as a rude shock to the public. For instance, the SGF had, a few months back, when the controversy surrounding his handling of the grass-cutting contract awarded for the North-East, been given a clean bill of health by the presidency. This caused uproar in both the National Assembly where he was allegedly indicted and the public who viewed the government action as tantamount to condoning corruption. In the case of the DG NIA, the discovery of a whooping N13b stashed away in a private apartment by the EFCC has become a subject of discussion all over the country and beyond.

Investigations revealed that the total money collected by this agency was in the neighbourhood of N56 billion. In that case, the N13 billion found hidden in the Ikoyi apartment could have been the balance of the money that was left in the kitty after all expenses suspected to have been made during the 2015 general elections.

The questions now agitating the minds of the people are: Is the presidency, Buhari? Or is the presidency being referred to here, the Cabals or scavengers around the corridors of power who have become so influential that they wield awesome powers?

The questions are germane because it appears that Lawal was quite aware that President Buhari had withdrawn from the public as a result of his illness, which recently kept him in London for about 50 days. Besides, in the past two weeks, he had been absent from some official functions, including the weekly National Executive Council meetings, only appearing briefly at the Friday Juma’at service within the confines of the Villa. At any rate, Lawal must have been in the know of the power-play in the Villa of which he could have been a major player himself. This was probably why he sought explanation on who the presidency that issued his suspension order was.

It may take many months, if not years or even eternity, to arrive at an appropriate answer to that question. The fact is that activities around the president in Nigeria have, for long, been shrouded in secrecy. Like it is obtainable elsewhere, there is always a coterie of influence-wielding people who cluster around the corridors of power and assume the role of defacto presidents all over the place. They could be friends of the incumbent president, his relations, a group of ministers or advisers who constitute themselves into what is called the kitchen cabinet.

Sometimes, these cabals could have the wives and or concubines of the sitting president as their arrow-head. We saw it in Turai, the late President Yar Adua’s wife; the late Stella, wife of former President Olusegun Obasanjo; and quite recently, in Patience, former President Goodluck Jonathan’s wife, including some primitive and not-too-exposed Ijaw boys and women of easy virtues, who suddenly assumed prominence in the corridors of power under the Jonathan administration.

For Lawal, he was largely known to the public as a very arrogant person. Even in his office, people talk so much about his arrogant posture and vulgar language. Many times, he was quoted as telling whoever cared to listen that he could have been better off if he was allowed to operate outside the government and corner contracts from all the states of the federation rather than being pigeon-holed in the government office. On a certain occasion, while he was going through the profiles of newly appointed ministers, he was alleged to have remarked carelessly that going by the facial outlook of one of the appointees, the person looks very much like an armed robber. That is an example of the type of people that are running the government of Nigeria.

As for Oke, those who have come across him, easily credit him as a quite humble, respectful and easy going gentleman. Agreed. But how do you reconcile that with the quantum of money allegedly discovered to have been stashed away in a private house under his watch. Remember, William Shakespeare once said: “There is no art to find the mind’s construction in the face.”

It was learnt that other security agencies got heavy allocations in the rundown to the 2015 elections. What this invariably means is that this money may have been set aside to influence the outcome of the 2015 elections. Therefore, it might just be necessary to widen the scope of the investigation to include other security agencies who might have been used as conduits to ferry out money for rigging the elections.

At any rate, all eyes are now on the Osinbajo-led three-man panel which has been constituted to investigate the allegations levelled against Lawal and Oke. The panel comprising the vice-president, Yemi Osinbajo, the Attorney General and Justice minister, Abubakar Malami, as well as the National Security Adviser, Major General Babagana Monguno (rtd.), has 14 days to summit its report. From the suspended SGF’s question of who the presidency really is, it is left to be seen how the white paper of the probe panel will turn out to be. Maybe by the time the result comes out, Nigerians would have, indeed, found an answer to Lawal’s question.

From the reports making the rounds, it is understood that but for the insistence of Osinbajo on the need to clear the air on these two principal officers, majority of the people in the presidency had suggested that the matter concerning both officers be treated as a security issue. And some of these people might be part of those (if not the people) who would sit with the president and take decisions on the issues.

For a long time, it has become increasingly clear that whereas Buhari is committed to the anti-corruption war, which is one of the cardinal programmes of the party in power, the All Progressives Congress (APC), it is doubtful if his co-travellers in government are so committed to the anti-corruption war. That is the reason Nigerians are very sceptical about the likely outcome of the panel’s enquiry at the end of the day. God help Nigeria!