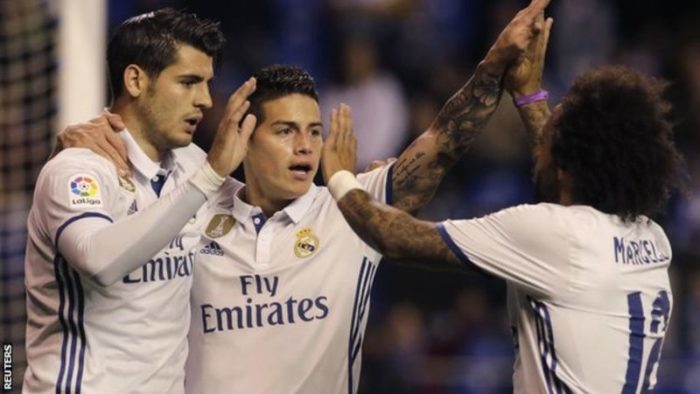 Zinedine Zidane’s side are level on points with Barcelona but have a game in hand and will claim the title if they win all their remaining matches.

Despite brief hope of a Depor revival at 2-1, Los Blancos replied to Barca’s earlier 7-1 win over Osasuna in style.

A double from James Rodriguez – his first a clever flick over the goalkeeper – and further goals from Lucas Vazquez, Isco and Casemiro ensured Florin Andone and Joselu’s strikes for the home side were purely consolation.

Sergio Ramos was also unavailable – through suspension following his red card in Sunday’s 3-2 home defeat by Barca – as Madrid made nine changes.

But they were far from struggling for fluency in the absence of key players as Depor, 16th in the table and seven points clear of relegation, were brushed aside.

Next up for Madrid is a home league match against Valencia on Saturday, before their Champions League semi-final first leg at home to Atletico Madrid on Tuesday, BBC reports.