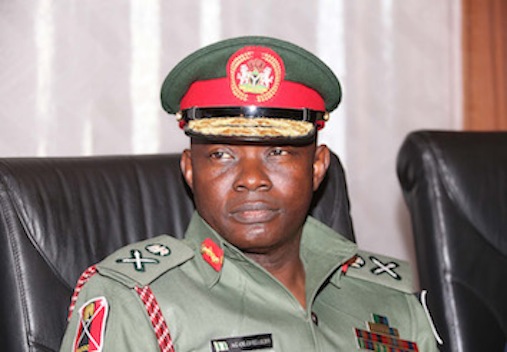 The defence chief told newsmen in Kaduna that `Operation Harbin Kunama ll, launched a week ago has made various recoveries of arms in the area.

“Of course we have seen various recoveries from the troops, and we will ensure that those efforts of our troops are well supported so that we can achieve greater feat in the operation.”

The CDS said the operation had adopted various approaches to address security issues in the area including banditry and cattle rustling.

According to him, traditional, religious and political leaders are all involved in the efforts to see to the realisation of lasting peace in the area.

“On the military side we have have deployed our troops there to ensure the issues are brought under control,” Olanisakin said.

The News Agency of Nigeria [NAN] reports that the defence chief was in Kaduna to inaugurate a 1,000 seat capacity auditorium at the Air Force Institute of Technology.

He commended the Chief of Air Staff, Air Marshall Sadiq Abubakar for his vision and exemplary leadership.

He said the auditorium and the lecture hall would provide conducive environment for learning and impact on operations being carried out by the Nigeria Air Force.

Abubakar said the 1,000 seat capacity auditorium and hall had been equipped with modern facilities and audio visual materials for effective learning.

He charged the staff and students to dedicate themselves to duty and continue to be disciplined and patriotic in the pursuit of excellence.

NAN reports that auditorium was named after late Air Marshall Ibrahim Alfa, the longest serving Chief of Air Staff, while the hall was named after retired Group Capt Benjamin Mosugu, who was the third commandant of the institute.