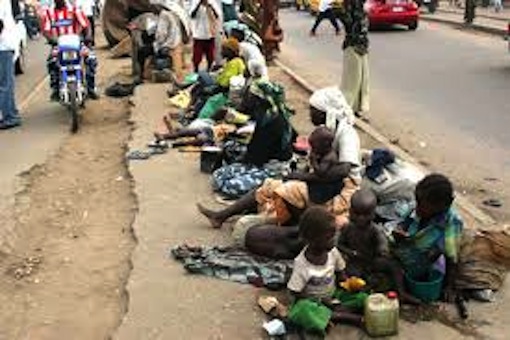 FILE PHOTO: Some beggars in Lagos

The Lagos State Government on Thursday said it would partner with the state governments in the northern part of the country in a bid to stem the influx of beggars into the state and address street begging.

The state’s Commissioner for Youth and Social Development, Mrs Uzamat Akinbile-Yussuf, said this at the annual ministerial briefing in commemoration of Gov.Akinwunmi Ambode’s second year in office.

According to her, the menace of street begging and the influx of beggars into Lagos has become a recurring decimal.

“The State Government is not resting on its oars to ensure that Lagos streets are rid of beggars, challenging as it may be.

“On the issue of influx of beggars into Lagos and street begging on our streets, it is something we are concerned about, and we’re leaving no stone unturned to ensure that we nip the matter in the bud.

“Government cannot do it alone. We need the collaboration and cooperation of everybody.

“On our part, we will be partnering with the northern states’ government where they come from, so as to agree on modalities as to how we can stop this influx.

“It is clear that most of these beggars come from the northern part of the country into Lagos, thinking that they will have a better deal here,” Akinbile-Yusuf.

She said the State Government would try to convince the northern leaders to, perhaps, make adequate provisions for them, so as to reduce their influx into Lagos.

“Our facilities are overburdened as it is already, and even if we continue to build, they will still continue to come,” she said.

On achievements by her ministry, she said 466 youths benefitted from various livelihood vocational skills training sessions to address unemployment and promote self-reliance/entrepreneurship in the state, in the last two years.

Also, on capacity building, she said 25 caregivers from correctional homes across the state benefitted from a five-day Train-the-Trainer workshop under the World Bank Assisted Expanded Public Sector Response, as part of Lagos State response to the HIV epidemic.