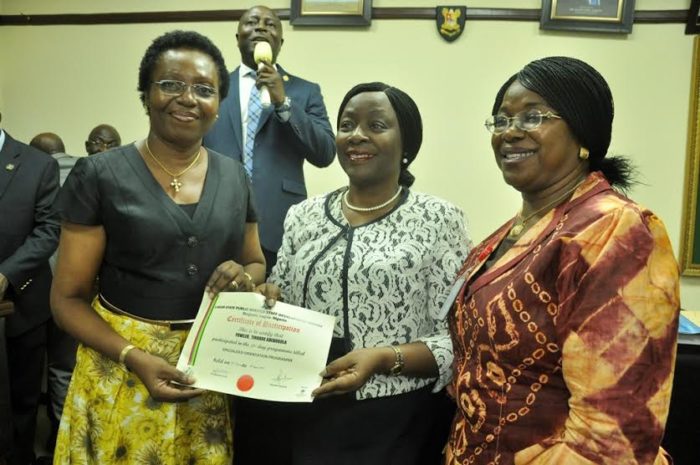 Lagos State Head of Service, HOS, Mrs Olabowale Ademola has expressed the State Government’s willingness to support the Ondo State Government in her drive and determination to establish its Public Procurement Agency.

Ademola made the commitment on behalf of the State Governor, Mr. Akinwunmi Ambode on Thursday in Lagos when she received a delegation of the Ondo State House of Assembly led by the Deputy Speaker who came on a study visit to the State in furtherance of the passage of its own Public Procurement Agency.

The HOS noted that the study visit by the Assembly underscored the need for regional integration and collaboration in order to further broaden and quicken the pace of development in the region.

Ademola pointed out that the visit would enable the team have clarity of purpose as they would witness the working first hand which would further ensure the smooth passage of the Ondo State Public Procurement Agency bill.

Earlier, the Deputy Speaker, Ondo State House of Assembly, Ogundeji Iroju explained that the visit would enable them learn from Lagos State with a view to replicating same in their State given that Lagos State is the forerunner in Public Procurement administration in Nigeria.

Meanwhile, the Head of Service has commended the State Governor for his excellent and effective commitment and implementation of the Human Resource Management (HRM) in the State Public Service.

The Head of Service gave the commendation in Lagos on Thursday at the closing ceremony of a specialized orientation programme for recently redeployed management staff of the local government service.

She noted that the specialized orientation programme was designed to broaden the knowledge base of the Officers and expose them to the structure, processes and procedures in the mainstream civil service in order to adequately prepare them for the tasks ahead.

Ademola urged them to bring to bear their diverse expertise, skills sets and varied competences towards continuous improvement of the quality of public service delivery in Lagos State.

“There is no gainsaying that the quality of an organization’s human capital is central and critical to the attainment of its goals and objectives. This underlines and explains the unwavering commitment of His Excellency, Mr. Akinwunmi Ambode, the Governor of Lagos State, to the vigorous and systematic reform of, not only Public Service structures, processes and procedures including the realignment of existing MDAs and creation of new Agencies, but also to the enthronement of an efficient and effective human resource management and development system that is in line with international best practices,” Ademola averred.

She opined that as management level Officers, they could not afford to be ignorant of the enormity of the responsibilities upon their shoulders to add value to public policy formulation and implementation given their extensive knowledge of the local government system.

The Head of Service urged them to always show leadership at all times knowing that the attainment of government’s policy objectives now and in the future depended largely on the competence and capability of the workforce that they would henceforth be called upon to supervise.

“As we all love to say; change is the only constant thing in life hence be prepared to embrace change because the world of today is a rapidly changing one in which yesterday’s solutions may be inadequate to address tomorrow’s challenges.

“Lagos, an emerging mega city and one of the 100 most resilient cities in the world, needs a more creative and dynamic public service whose leadership must be proactive and constantly ahead of the game. Today’s world is technology-driven; as such you must regularly update your knowledge and skills in order to remain relevant,” Ademola said.