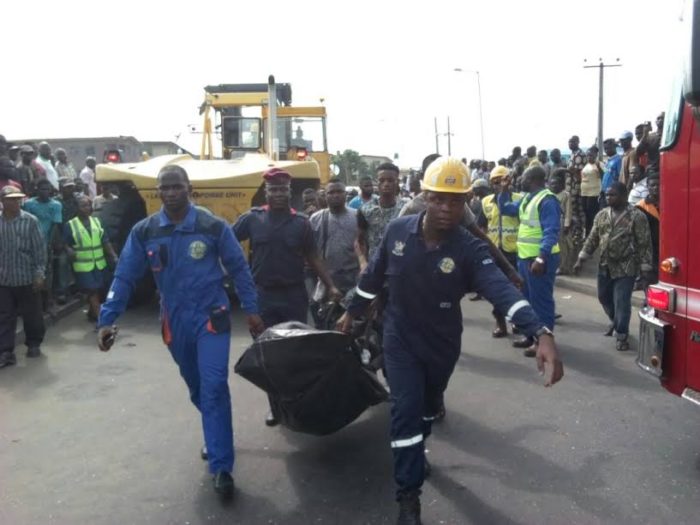 The remains of the okada rider being taken away

A trailer has crushed an okada rider to death at Isolo area of Lagos, Southwest Nigeria.

The tragedy occurred at about 9:19 a.m on Thursday at Daleko Bridge, inward Isolo, Lagos emergency agency has said.

General Manager, Lagos Emergency Management Agency, LASEMA, Adesina Tiamiyu said the agency received a distress call at about 9.19 am concerning an accident at Daleko Bridge inward Isolo, which prompted the immediate activation of the Agency’s Emergency Response Team, ERT to the scene of the accident accordingly.

“Investigation conducted by the Agency’s ERT on getting to the scene of the incident revealed that a bike man was crushed under a trailer while trying to make a u-turn. The driver of the trailer absconded immediately the accident occurred but was later apprehended by Police officers and was taken to Olosan Police Station, Mushin for further interrogation.

“Unfortunately, the driver of the bike identified as Biliaminu Olayiwola lost his life due to the incident and was recovered by the LASEMA’s response team and was later handed over to the Police,” he said.

“The agency’s ERT with NSCDC attached alongside LASAMBUS, LASTMA, Lagos State Fire Service from Isolo station, Nigeria Police Force and FRSC were the responders at the scene of the incident,” he added.

Tiamiyu said the trailer was recovered off the road with a tow truck provided by LASTMA and moved to a safe place, thereby ensuring free vehicular movement.

He advised motorist and okada riders to always ensure utmost safety while on the highway to avoid unnecessary loss of lives.