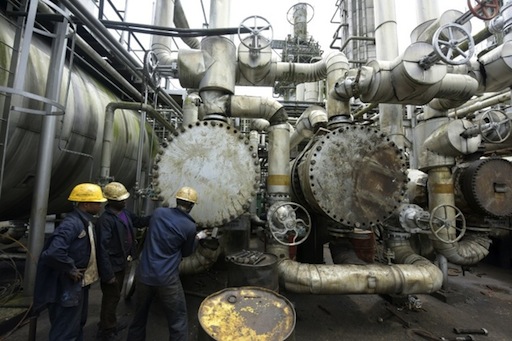 The Port Harcourt refinery is Nigeria's oldest, built in 1965, nine years after oil was found under the marshy soil and creeks of the delta ©Pius Utomi Ekpei (AFP)

Speaking at an Open Forum on Environmental Impact Assessment (EIA) on the Eghudu Refinery in Benin Thursday, Ihaza said the refinery will produce 80,000 barrels of refined petroleum products daily.

He told the forum that with his vast experience in one of the largest refineries in the United States of America and with no fewer than 100 Engineers under him, he knew all about the refinery processes and was already discussing with the relevant Federal government agencies for the immediate take-off of the project.

“I choose to site the refinery in Eghudu so as to help our people back home in Nigeria. I am very passionate about this project. You know that investors are not easy to come by when you mention the name Nigeria, but my pedigree as a Chemical Engineer in one of the world leading refineries had opened the door for me.

“I have got a consortium of bankers and investors for the project and the phase one of is ongoing. As part of our social corporate responsibilities to the communities that will be affected by the project, we are going to construct roads, build satellite clinics, a standard primary and secondary schools and a functional international market,” Ihaza said.

He sued for the cooperation of the communities and appealed to them to work with the site engineers and other workers for the successful take-off of the project saying, “we want to start work now.”

Earlier, presenting the EIA Report on behalf of the consultants, Vokosen Ltd, Prof. Larry Edosomwan said the report has captured all the social economic need of the communities.

“We have looked at the positive social and economic needs of the communities, the aquatic environment, drainage and sewage management, treatment of effluents, forests will not destroyed and where it happened, we will plant trees. We have ensured that we meet the requirements of the Ministry of Environment and the DPR. We will mitigate against all negative environmental impacts,” he said.

Spokesman for the Minister of Environment, Alhaji Ibrahim Jubril, Mr Joshua Taiwo, said he was happy that the project was named after the community, saying that when completed, the project will provide jobs for the people and improve the social economic lives of the communities around it.

Already, about 453.9 hectares of land has been provided for the take-off of the project by the community.