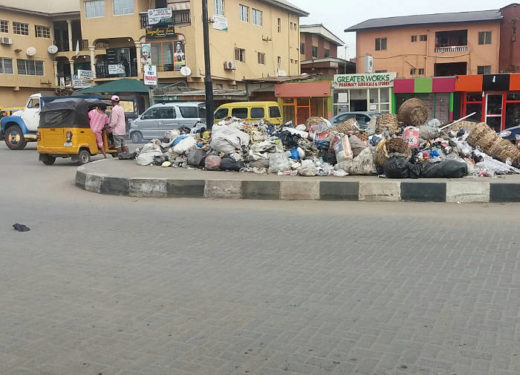 Waste dump on the streets of lagos

A baby was on Thursday found dead inside a refuse sack at a dump site near a market in Alagbado, Lagos State.

The dump site is near the African Independent Television (AIT) Road Market.

The dead baby rolled down from the sack as the sack was being dumped into a refuse vehicle.

Refuse collectors saw the baby and raised an alarm.

Market men and women gathered at the scene and ‘rained’ curses on the culprit.

A policeman at the scene said an investigation would be carried out to find out the culprit.

The policeman from the Alagbado Police Station pleaded anonymity.

The dead baby has been deposited at a mortuary by the Lagos State Emergency Management Agency.

Mrs Omolara Farounbi, the market Iya-oloja (Market Leader), called on traders in the market to be more vigilant.

She said that the perpetrator was able to carry out the act because the traders cleaned up the market and packed refuse for disposal on Friday.

“It was convenient for the person to dump the baby in the sack overnight.

“We have informed the police and called the Lagos State Emergency Maintenance Authority (LASEMA) about the incident,’’ she said.