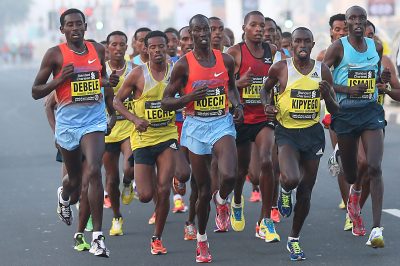 Efforts are in top gear to host a 21-kilometre international half-marathon race in Ibadan, Abayomi Oke, the State Commissioner for Youths and Sports, said in Ibadan on Thursday.

The News Agency of Nigeria (NAN) reports that the marathon would centre on the city’s seven famous hills, such as Oke Mokola, Oke Ado, Oke Mapo, Oke Aremo and Oke Aare.

NAN reports that the route-mapping exercise for the race was held on Thursday in Ibadan by some officials of the organising body.

The State Commissioner for Youths and Sports said the aim of the race was to showcase the cultural architecture as well as natural aesthetics of Ibadan to the world.

“Government will use the event to positively engage the youths and attract international attention to the beauty of the state capital.

“The idea is to show further that the Ajimobi administration is not just touching lives positively on structural development through urban renewal program, but also adding value to sports and tourism.

“This is for the sake of generating goodwill and economic power,’’ he said.

Oke stated that youths of all categories would participate in the race not just for the prize money but run alongside their mates from Nigeria and abroad.

The commissioner said the event would also put Ibadan in the international calendar of events.

“Details of the event would be announced after the application to AFN and IAAF must have been endorsed.’’

He said the race would be organised on a public private partnership arrangement, adding that the 21km half-marathon race would join the few existing marathon races in Nigeria.

Oke advocated maximum support from private companies and corporate bodies to ensure that the race achieved its desired goals and in line with the pacesetting status of the state.

Similarly, Toye Arulogun, his Information, Culture and Tourism counterpart, said the coverage of seven hills in the race was strategic to viewing the structural distinct of the largest city in Western Africa.

“If you get to the top of any of these hills, you will have a vantage view of any part of the ancient city and its beauty.

“Most of our monuments will be viewed easily from a distance and better with viewing equipments. So, we will showcase Ibadan from all angles with this event.

“I am very sure that the aerial view of the city will attract visitors to come again and again,” he said.