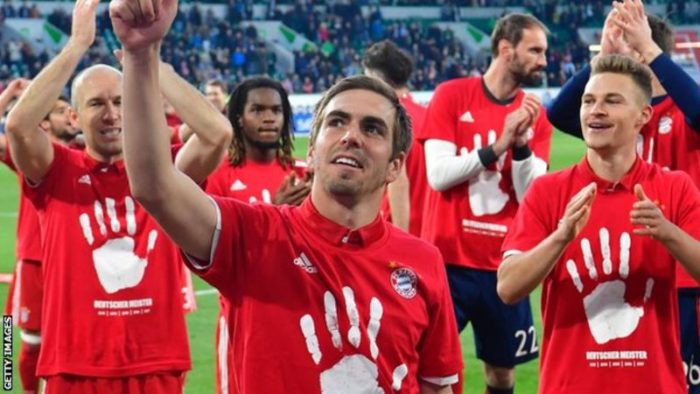 Bayern Munich thrashed Wolfsburg 6-0 to clinch the Bundesliga for a record fifth straight season and give manager Carlo Ancelotti a title in a fourth top European league.

It has been another season of domestic dominance for Bayern, who wrapped up their 27th championship with three games to go with a thumping win.

Ancelotti’s side have lost just twice in the league all season and were never troubled by out-of-sorts Wolfsburg.

Wolfsburg can still be relegated.

From the minute Austrian left-back David Alaba fired Bayern ahead from a free-kick, the destination of three points and the title was not in doubt.

Poland striker Robert Lewandowski scored twice before half-time to make the second 45 minutes a formality, while Arjen Robben added a trademark shot after cutting in from the right.

Wolfsburg captain Luiz Gustavo was sent-off against his former club late on and had to be restrained by team-mates after sarcastically applauding the referee, before Thomas Muller tapped in a fifth.

There was still time for Josh Kimmich to drill in a sixth and leave the home side just a point above the relegation zone.