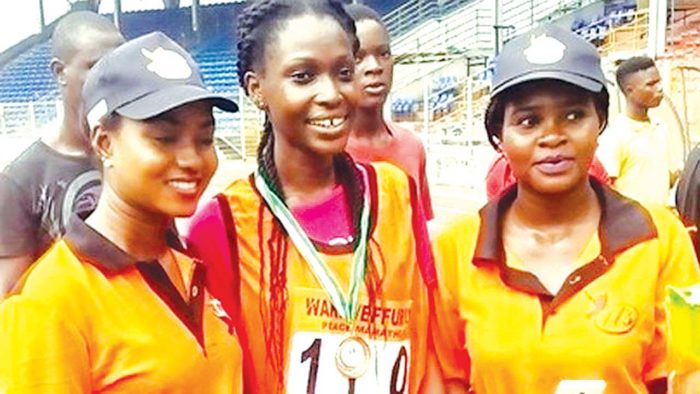 Marathoners at the race

A youth corps member, Adamu Mu’azu, on Saturday emerged winner of the male category of the second edition of Warri/Effurun Peace Marathon in Delta.

Mu’azu, from Plateau, ran 30:44 seconds to clinch the first position.

The 28-year-old athlete, who attributed his feat to regular training, said he had participated in many national and international competitions.

Rotkang James, also from Plateau, won the female national category with a time of 33.26 seconds. She was closely followed by Annah Nwabuike and Godwin Theresa.

For the wheelchair category, Sefiu Ojeleye came first in the male category.

“I feel happy; I was the winner of the Access Marathon that was held in February in Lagos.

“My target is to represent and win medals for Nigeria in international competitions,” said Ojeleye.

Over 200 athletes participated in the 10-kilometre race which started in Effurun and terminated at the Warri Township Stadium.

In her remark, the organiser of the event, Joyce Bozimo, said that the marathon was to foster unity among the various ethnic nationalities in Delta and the country in general.

She promised to sustain the annual event.