The Growing Problem of Untreated Dementia 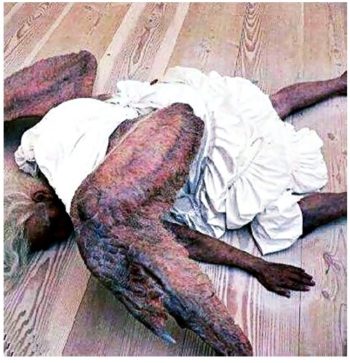 The bird that allegedly fell from the sky and turned into an old woman. She could be suffering from dementia

Just recently a picture of a half-naked elderly woman surrounded by a lynch mob appeared online in one of the many blogs under the caption: ”Bird falls from sky and transforms into woman”.

Now it beggars belief that in this day and age where everybody has a smartphone, with video recording capability, that nobody has been able to provide video footage of an actual bird changing into a woman. There’s footage of people being lynched, fights, accidents – even women giving birth on the road but never of a bird metamorphing into a witch. Why? Because it’s not true and its hearsay generated by illiterate gossips who need their mouths padlocked! (- I’m not saying witches don’t exist. To be quite honest I know quite a few!).

The poor old woman, and many others like her, is probably suffering from dementia.

Dementia is a mental disorder that affects older people.

A person suffering from dementia will start to go mad, see things that aren’t there, talk to themselves whilst at the same time suffer memory loss and lose the ability to function normally on a day-to-day basis. It’s worth noting at this point that there is no need to cart off a dementia sufferer to the nearest church for ‘spiritual healing’. There are no demons to cast out and any pastor will only make the problem worse.

There is no known cure for dementia, just like with Alzheimer’s disease, even though a healthy diet, being physically active all the time and counselling can help to minimize the condition.

People who have advanced stages of the disease will need to be put under 24-hour supervision so that they do not wander off (and risk being accused of being ‘witches’!) or harm themselves. Remember with their brain cells dying their reasoning diminishes making them regress back to acting like children, forgetting things and getting up to general mischief. They are not to be abused or scolded for half the time they are not aware of what they are doing.

In the absence of any official figures detailing how many sufferers there are it is difficult to say to how it has spread throughout the country. But nevertheless people need to be educated on what symptoms to look out for. Again it’s not something that was caused by drugs or curses as lots of people would like to believe. A person with dementia needs a lot of help and support on a day-to-day basis and in the absence of a comprehensive mental health programme this help will have to come from friends and family. Don’t believe in quacks, pastors or babalawos who claim to have cures for the ailment – there is no cure! (- they’ll only con you out of all your money pretending to cure them!). There are organisations like Dementia Nigeria who can offer help and advice and a quick Google search will throw up even more options.

So next time you see an old woman being accused of witchcraft by a lynch mob she might just be suffering from dementia and abandoned by her family.

As we are respectful of our elders the same should be accorded to someone who has dementia.

Try and imagine being in their shoes: your brain isn’t working properly so that you don’t even know who you are let alone the people around you. You don’t know what time of the day it is or even which day of the week. You can’t remember what you had for breakfast let alone lunch. You watch TV and don’t even know what you’re watching. These are some of the things dementia sufferers have to endure on a daily basis. It’s painful for them because they try to get their brains to work and nothing happens. It’s a bit like when your PC or laptop crashes. But your PC or laptop can go into ‘safemode’, restart and repair itself the brain of a dementia sufferer can’t.

All respect and support should be accorded to anyone who has dementia. Remember it can happen to anyone, nobody is immune – doctors, mechanics, teachers, politicians – anyone! As a prevention try and stay healthy: exercise as often as possible, try and eat a healthy diet and keep your brain busy reading, doing puzzles etc.