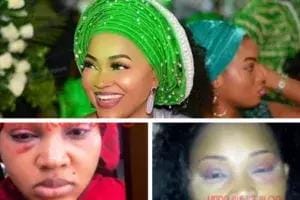 The good, the bad and the ugly. Mercy Aigbe, what went wrong?

All is not well with Nollywood actress, Mercy Aigbe-Gentry, as reports and photographs of her being battered by her husband flood the social media.

In a photograph exclusively obtained by Linda Ikeji Blog, the telltale signs of battering were visible on Mercy’s face.

It was learnt that all has not been well with the seven-year old marriage of Mercy Aigbe to hotelier Lanre Gentry as the former had been enduring domestic violence which got worse lately.

Sources revealed that the couple had a nasty fight last week that left the actress with severe injuries and she’s still receiving treatment at an undisclosed hospital in Lagos.

But Lanre Gentry later deleted the post and posted another one showing him and Mercy together.

The blog reports that the crisis in the actress’ marriage, was caused by one fair skinned lady. It is alleged that she has been having an affair with Mercy’s husband.