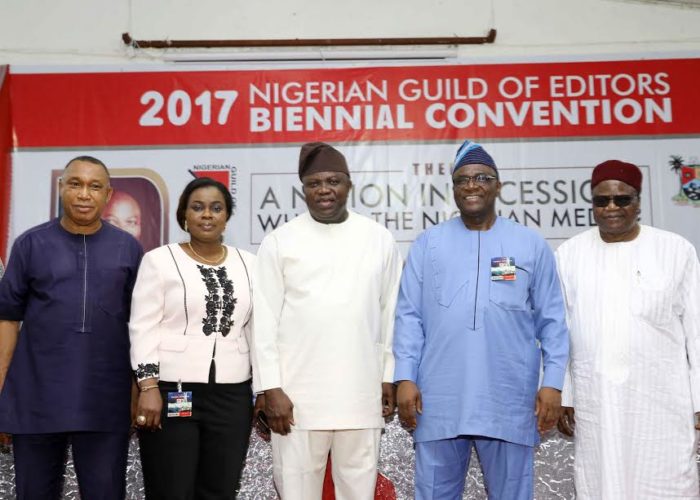 Mr Emma Agu, former Managing Director, Champion Newspapers, on Saturday urged the Nigerian Guild of Editors (NGE) to come up with capacity building programmes for its members, to improve professionalism in media practice in the nation.

Agu made the call in Lagos at the biennial convention of the NGE in Lagos.

He said that the media should encourage professionalism over trade unionism, in order to get the nation out of recession.

“Professionalism is the path to knowledge, respect and efficiency. To insist on trade unionism will continue to retard corporate growth, diminish individual ambition, breed quackery and erode respect.

“Like the accountants, lawyers and engineers, journalists in Nigeria should go the professional way. This entails a qualifying exam, a code of conduct and a set of sanctions for breaches of the code.

“By extension, it is in the interest of the media to have an effective media council that serves as an arbitrator in disputes, he said.

Agu explained that capacity building for journalists was important, so as to equip them with adequate knowledge for proper information dissemination, in order to shape the policies of government, as well as properly inform the public.

He said that the topic, “A nation in recession: Whither the Nigeria Media“, was timely in addressing current challenges facing the media and the nation.

“If you asked many a journalist the last time he or she attended a capacity building programme at the instance of his/her organisation, you will be shocked to your bone marrow at the response you will get.

“So, on what intellectual or professional basis is the person reporting in a rapidly changing environment? This, perhaps, is one of the benchmarks that should drive the incoming leadership of the NGE.

“The Guild should establish mandatory, periodic professional enhancement and capacity building programme as the accountants and engineers do,“ he said.

Agu said that recession was not peculiar to Nigeria alone, adding that the media industry had began experiencing recession long before it hit the nation.

He stressed the need for editors to be empowered to adequately confront issues affecting the nation and the industry.

The guest speaker called for restructuring of the nation to ensure healthy competition among the regions, to speed up the growth of the economy.

He commended the current monetary policies of the CBN, noting that they would effectively address the recession.

Agu also commended the fight against insurgency in the North East, “paving the way for the restoration of economic activities in most parts of the north east“.

The publisher said that the constructive engagement with Niger Delta militants was also boosting oil production.

He commended the President Muhammadu Buhari administration for continuing with the rail project initiated by the previous administration.

Agu explained that government was about continuity and the Buhari administration had demonstrated maturity in that regard.

He called on journalists to support the fight against corruption and the whistle blowing policy of the present administration, which according to him, was yielding results.