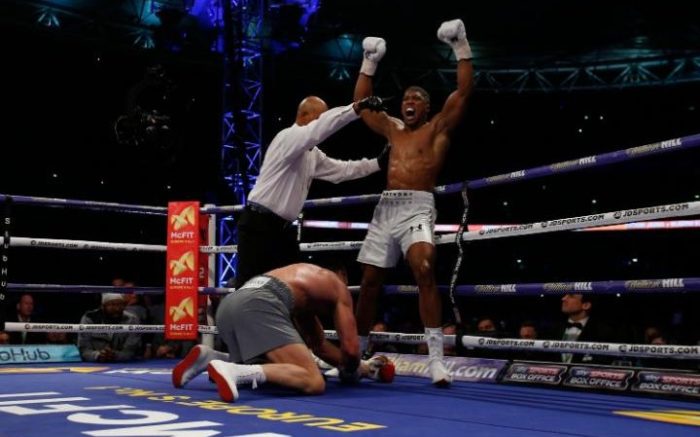 Some boxing legends, as well as enthusiasts across the globe on Sunday hailed the victory of Anthony Joshua over Wladimir Klitschko.

Joshua became the unified heavyweight world champion by adding the WBA belt to his IBF title, with an 11th-round stoppage of Wladimir Klitschko in a thrilling fight on Saturday at Wembley.

The 27-year-old was earlier sent to the canvass in the sixth round, but had Klitschko on the canvas twice in the penultimate rounds, before the referee stepped in.

A cross section of boxing legends and enthusiasts who wrote on their twitter handles, noted that the match was an epic encounter between two great boxers who gave spectators, ‘a run for their money’.

Former heavyweight champion Lennox Lewis said: “Crackin’ Fight! Congrats to both for giving the fans something to talk about! Big up to AJ on the big win! How much heart did Klitschko show in this fight?”.

American boxing great Sugar Ray Leonard described the encounter as an “an amazing fight, with two great fighters”, adding, “Lot of heart by both fighters. A lot of questions answered by Anthony Joshua.”

As for former world champion Frank Bruno, “the heavyweight division just got very exciting,” noting that “the performance of both men tonight was incredible.”

Also, former Olympic heptathlon champion, Dame Jessica Ennis-Hill was so thrilled by the encounter that he described it as “incredible” and “unbelievable.”

“Well done to both Anthony and Wladmir, but a huge congrats to @anthonyfjoshua for bringing it home! Great fight! #bigupyourself,” he said.

Former England footballer, Michael Owen was full of feelings of patriotism for his motherland as he twitted that “Great Britain aged five years during that fifth round,” but thanked God that “Joshua found a second wind from somewhere.”

For Gary Linker, a renowned sports pundit,”so gripping was the fight that all three of us in the @BBCMOTD studio jumped up when @anthonyjoshua won.”