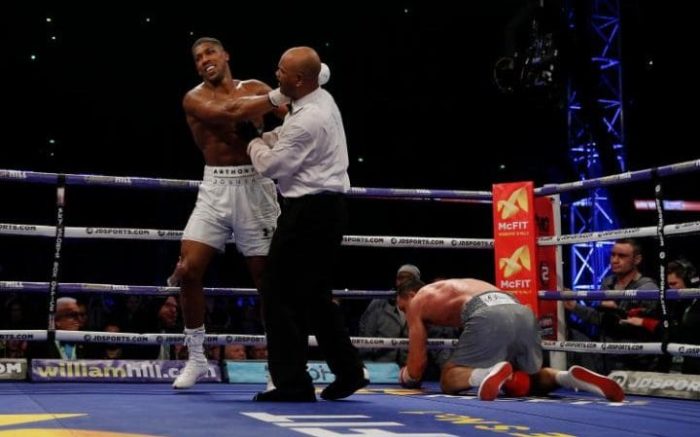 Klitschko down and out

Tyson Fury on Sunday accepted the challenge issued by world heavyweight champion Anthony Joshua following the Londoner’s title victory over Wladimir Klitschko, according to the BBC

Joshua, who stopped the Ukrainian in the 11th round at Wembley on Saturday, immediately called out fellow Briton Fury, who beat Klitschko on points in November 2015.

Fury, who has not fought since beating Klitschko, replied: “Let’s dance.”

Joshua is now unbeaten in 19 fights, with all his victories coming inside the distance. The 27-year-old’s win in front of a post-war British record 90,000 fans at the national stadium added the WBA belt to his IBF strap.

Fury, 28, is also unbeaten as a professional, with 18 knockouts in 25 fights, but surrendered his world heavyweight titles in an effort to focus on his mental health problems and is currently without a boxing licence and out of condition.

However, he remains active on social media and indicated he wants to return, judging by his reply on Twitter to Joshua’s calls from the ring.

“Challenge accepted,” Fury wrote. “We will give the world the biggest fight in 500 years. I will play with you. You are a boxer’s dream.

“Well done Anthony Joshua. Good fight. You had life and death with Klitschko and I played with the guy. Let’s dance.”