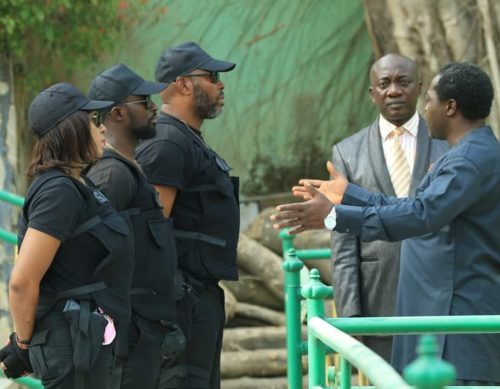 The cast of 'Conscripted'

The film titled “Conscripted”, is a production of Capital Pictures, and was premiered on Saturday night at the NAF Conference Centre.

Mr Aik Odiase, the producer of the movie tells the story of insecurity as a global challenge, and why people should appreciate the unique sacrifices paid by security men in the service to their fatherland.

He said: “Conscripted is a call-up to a sacrificial service to defend one’s country, and that of victory of good over evil.

“The story plot was culled from the Society, what the world and Nigeria in particular, is doing to surmount terrorism and all forms of insecurity.

“There were bombings, kidnappings, rapes, armed robbery and other security challenges threatening the peace of Nigerians.

“Because of the increasing rate on security challenges in the country, three selfless officers were drafted and specially trained by the relevant authorities to combat crime.

Odiase noted that like many security officers, the anti-crime squad members paid some costly prices in their passionate service to their country.

He added that the scenario was to reassert the need to appreciate and support security officers in ensuring a safe society for all.

“In the process, Edge lost his daughter, and Brown lost his mother who was kidnapped.

“Pinky on her part, lost her relationship when she found out that her man was one of those terrorising the state.

“All these clearly express the fact that our security men are human after all, they and their families also need protection.’’

Other casts include Sir K, Mikky Odey, Sunny Williams and Lizzy Ofuani, among others.

Mr Sunny-Ken Awoji, the Vice Chairman of Abuja Chapter of the Association of Movie Producers (AMP), who also collaborated in the “Conscripted” project, commended the initiative.

He noted that the movie was a big boost and would open new frontiers for the film industry in Abuja, since it was one hundred per cent produced in the territory.

“This movie is a clear reflection of the potential that abound in the Federal Capital Territory, in terms of filmmaking.

“All the actors, producer, director, and even the equipment and locations used in the movie are from within Abuja.

“This is the first time this is happening, as what we usually see is to see someone come with casts and shoot a movie and then leave

“We have used “Conscripted” to create a niche for the movie industry in Abuja,’’ he added.

Awoji noted that the movie had received several nominations for both international and local awards.

Actors, producers and other stakeholders in Nollywood across the country were among those present at the premiere.