May Day: Why Danfo buses must go - Ambode 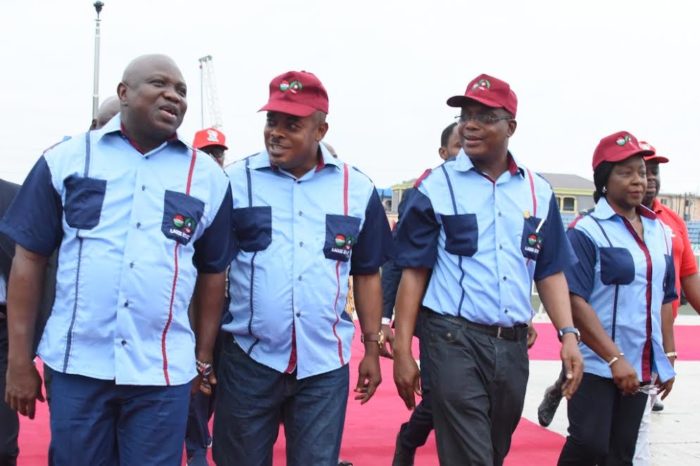 Lagos State Governor, Akinwunmi Ambode on Monday said the government will not rescind its decision to ban Yellow buses, popularly known as ‘Danfo’ in the state as a mega city state like Lagos deserves a better means of transportation.

The governor allayed fears that plans to phase out Danfo buses would lead to massive job losses, saying that it would instead create more jobs in the transportation sector.

The governor, who spoke at the May Day Rally held at the Agege Stadium, in Agege, Lagos, Southwest Nigeria to commemorate the 2017 Workers Day Celebration, said the Bus Reform Initiative, aimed at introducing over 5,000 air-conditioned buses to replace the Danfo buses would open new vista of opportunities, while also redefining the means of road transportation in the State.

Responding to the fears raised by the Chairman of the Nigeria Labour Congress (NLC), Lagos Council, Comrade Idowu Adelakun and his Trade Union Congress (TUC) counterpart, Comrade Francis Ogunremi on the implications of the initiative to drivers, conductors, mechanics and other artisans, Ambode assured that it would benefit all Lagosians on the long run.

He said: “If Lagos is to be globally competitive, we need to change the outlook of the way the city runs. What is of paramount interest to this government is to make sure that every Lagosian has a comfortable means of moving from one point to the other. But I promise you there will be no job losses.

“The Governor is not interested in driving all the new buses. It is the same bus drivers, the technicians, the mechanics that will also still be employed and trained to use these new buses. Instead of job losses, we are going to employ more people for the greater number of the buses and it will make the city more beautiful and more comfortable for all our workers.”

Ambode, who also addressed the request of the labour leaders on workers’ welfare, assured that as the State’s Internally Generated Revenue (IGR) continues to increase, his administration would work out modalities to improve the welfare of workers in line with his mantra of all-inclusive governance.

The governor said that his administration was ready to look into the plight of pensioners as regards the pace of paying pension, assuring that the process would be fast tracked immediately.

“Just like we have said, we have provided vehicles for the unions but again it has not gone round and it has also not gone round to the private sector unions, we will complete the whole scheme before the end of the year,” he said.

The governor said as part of the celebration of 50 years of the State, his administration would provide a befitting State Secretariat for the NLC, while government would also work on local and international training for labour leaders to make them relevant to the growth of the economy.

Ambode also assured that the officers of the State Public Service, who according to him, were the real drivers of the development in the State, would continue to be equipped with the necessary competencies and skills in order to deliver effective and efficient service to the people.

Commending the choice of this year’s May Day celebration themed, “Labour Relations in Economic Recession: An Appraisal,” the governor said the leadership of Labour unions had demonstrated a responsible sense of stakeholding in the joint enterprise to improve the society and leave lasting legacies for the generations to come through the creation of sustainable wealth and value.

Besides, the governor enjoined the organised labour to continue to show understanding, while rightly insisting on the due and just entitlements of their members, saying that any industrial unrest will compound the challenges of economic recession.

“I wish to commend the example of Lagos State to the entire nation in respect of industrial harmony. In Lagos State, both the government and organised labour believe that negotiations are more democratic and effective than unilateral impositions by the government or unilateral demands by the workers,” he said.

While alluding to the fact that his administration would not have been able to fulfill the electoral promises without the support of the “most versatile, resilient and innovative Public Service in the nation”, he noted that the immense contributions of all workers in the private sector was also chiefly responsible for the pride of place that Lagos occupies in our nation, in Africa and in the world at large.

Earlier, Comrades Adelakun and Ogunremi commended Governor Ambode for his commitment to workers’ welfare and the determination with which he had been transforming the State, describing the governor as an accomplished accounting professional, creative intellectual, skilled planner and focused implementor.

The May Day Rally featured March pasts from various Labour Unions, Trade Organisations and its Affiliates who trooped out en-masse despite the heavy downpour and were excited to see the Governor celebrate the day with them.