Ambode gets N3.84 billion to fight HIV/AIDS in Lagos 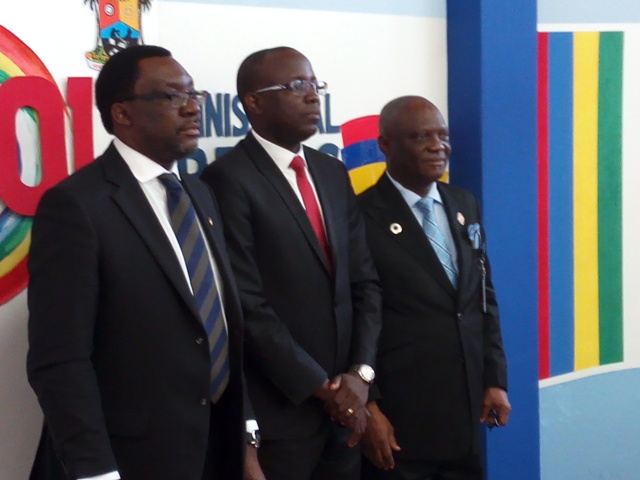 The Lagos State Governor, Akinwunmi Ambode has received the sum of N3.84 billion ($9.6 million) from donor agency, Global Fund to fight the scourge of HIV/AIDS in the state.

Commissioner for Economic Planning and Budget, Akinyemi Ashade disclosed this on Tuesday at a ministerial press conference in Alausa, Ikeja, Lagos, Southwest Nigeria.

“Global Fund is supporting the Lagos State HIV and AIDS response with the sum of USD9.6 million to be used for the implementation of comprehensive HIV prevention, treatment, care and support programme across 70 health facilities in the three Local Government Areas, LGAs of Epe, Ikorodu and OshodI Isolo.

“His Excellency, the Governor of Lagos State, Mr. Akinwunmi Ambode, visited Global Fund in New York sometimes in June 2016, to reassure them of his commitment to the judicious use of the grant meant to reduce new HIV infections, and improve the quality of life for the infected, affected, and to place 10,337 People living with HIV (PLHIVs) on treatment of which 3,876 are children, knowing full well that a healthy population drives goal and development,” he said.

Ashade said the grant’s targets to be achieved by the end of December 2017, included 289,344 persons knowing their HIV status; 17,049 People Living with HIV (PLHIV) to be placed on treatment; 54,140 pregnant women to be tested for HIV and 2,131 HIV positive pregnant women to receive treatment for the prevention of mother to child transmission.

According to him, achieving these targets would not only contribute to the improvement in their quality of life but also reduce the HIV prevalence in the state.

On funds disbursement, the commissioner said the Lagos State Ministry of Health signed the grant agreement with the Global Fund on the 25 January, 2017 and received notification of disbursement on 10 March while the eventual funds of $270,988 was released on 14 March, 2017.

“The Sub Recipient (SR) that will support provision of HIV Testing Services(HTS), Prevention of Mother To Child Transmission (PMTCT) and Anti- Retro Viral Treatment (ART) services at the facilities have received their first disbursement of $248,096 directly from the Global Fund.

“The service providers that will coordinate the conduct of the Lagos State AIDS Indicator Survey have received their first disbursement of $1,160,783.45 to commence the implementation of their activities,” he stated.

The commissioner also disclosed that N291 billion was expended on infrastructural development by the government in 2016.

He said the amount of money spent on capital development was justifiable and borne out of the administration’s desire to drive the implementation and execution of projects and programmes that would lead to the good performance of the budget and encourage focus on patronage of local contractors which would continue to help in job creation.

He mentioned some of the projects embarked upon and some of which were still ongoing to include completion and commissioning of 114 roads in partnership with Local Governments and Local Council Development Areas; the construction of overhead fly-over bridge at Abule Egba and Ajah; removal of six roundabouts along Lekki-Epe Express axis and replacing them with traffic light alternation system, Bus Rapid Transport garage in Ikeja, among others.

Ashade assured that the Ministry would continue to manage the economy of the State through prudent and stringent management of available resources as well as deploying international best practice models and reforms for effective mobilization, planning, allocation and utilization of resources so as to ensure that the desire to meet the revenue projections of N30bn monthly in 2017 and N50bn monthly in 2018 and transformation of Lagos State into the desirous 3rd largest Global Economic Financial hub and Africa’s Model Megacity through improvement on the various reforms aimed at improving Revenue collections in various revenue agencies, would continue unabated.

“Overall, the Internally Generated Revenue performed at 82% for first quarter of 2017. We are currently finalizing the audit of the first quarter performance and further breakdown will be made available after the process is concluded.

“In ensuring a strict implementation of the 2017 budget, it is our resolve to continue to ensure tighter control of recurrent expenditure to free up funds for the capital proceeds while still maintaining our periodic review of performance through the quarterly budget appraisal,” he said.