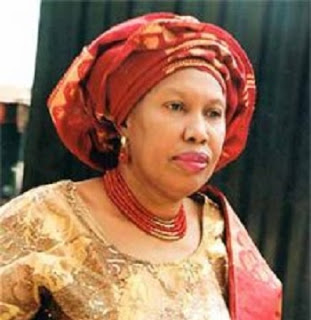 One of the wives of former President Olusegun Obasanjo, Taiwo Obasanjo has said that the wedding between her son, Olujunwo and Tope Adebutu is an occultic ceremony which will result in a feast of deaths.

In a statement on Tuesday, Obasanjo said that the May 11 and 13, 2017 chosen by both the Obasanjo and Adebutu families for their children’s wedding was compelled by Satan to lure unsuspecting numerous souls to a banquet of deaths that would herald a strange holocaust in the country.

Obasanjo who had earlier lost an attempt to use the court to stop the wedding, stated that her plea to family members on the evil consequences of the wedding date and the need to postpone it fell on deaf ears.

She also claimed that her daughter-in-law, Tope and her mother, Rosemary Da-costa intended to use the wedding to prolong their lives and renew their covenant with Satan.

She warned those attending the wedding that immediately after the wedding, there would be strange diseases, multiple road accidents, plane crashes, fire incidents and strange deaths across the country.

Obasanjo insisted that her son had been bewitched and cast under a spell and that all entreaties to make him see reason why the wedding should be postponed failed.

She stated that on the day of the wedding, she will lead a peaceful protest march at the venue since all her efforts to stop the wedding have failed.

” Please I want the whole world to know that I am not mad and I am not against my son’s wedding but the whole truth will be revealed by the almighty God who sees in secret all that is hidden. I have written to the Nigerian Police and the Military Police of my intention to peacefully have a protest as a citizen of Nigeria. Me and my people shall be peacefully singing, dancing and praising God,” she said.

In a separate letter to the Prelate, Methodist Church of Nigeria urging the church to consider rescheduling the wedding, Obasanjo said she would continue to pray for the liberation of her son from the spell cast on him.

Read the full text below: 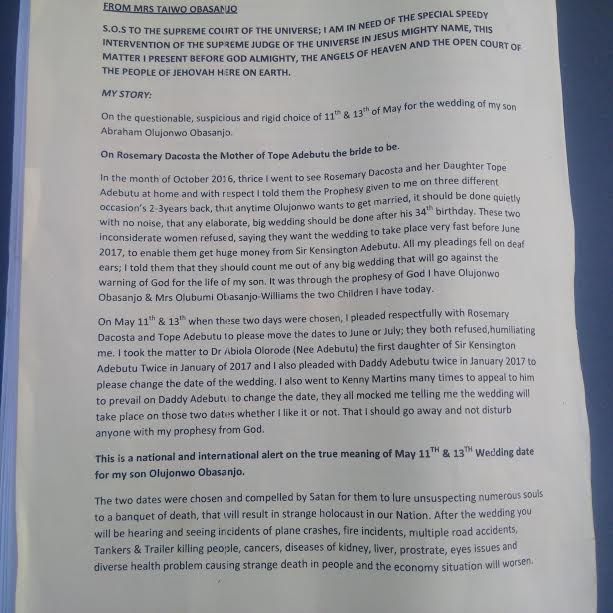 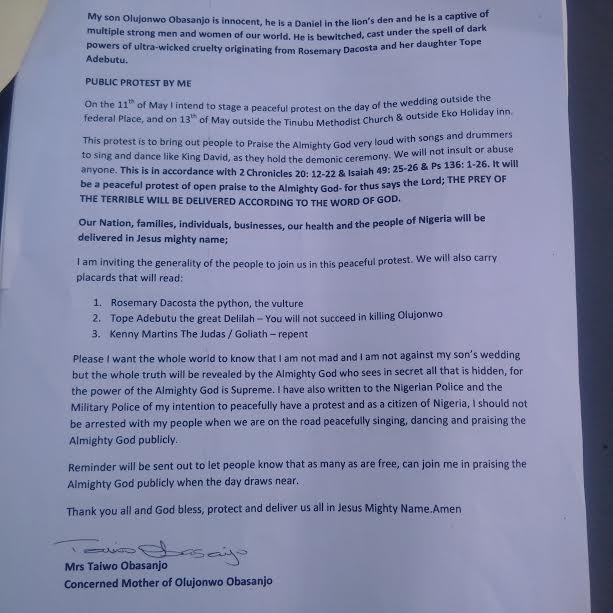