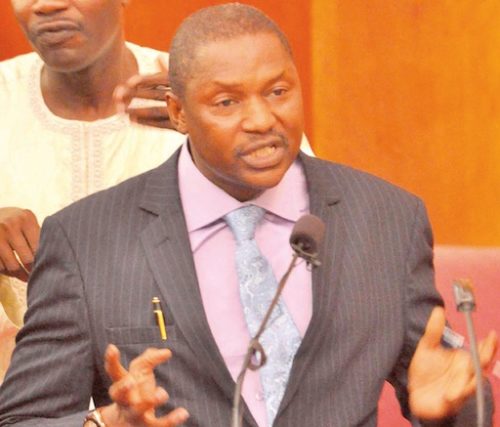 The invitation followed a motion by the Deputy President of the Senate, Ike Ekweremadu, at Plenary.

Also invited to explain their level of involvement in the issue are Minister of Interior, Abdulrahman Dambazau and his Foreign Affairs counterpart, Mr Geoffrey Onyeama.

The ministers will appear before members of the Senate’s Committee on Judiciary, Human Rights and Legal Matters.

It directed that the AGF should give the committee an update on the status of ratification of all treaties from 1999 to 2017.

The upper chamber also urged the Federal Government to stop receiving prisoners under the Prisoner Transfer Agreement until the matter was resolved.

Presenting the motion earlier, Ekweremadu said that the Federal Government on January 9, 2014, entered into an agreement with the United Kingdom for the transfer of sentenced persons in both countries.

He said that the agreement was made by both countries and authorised by their respective governments, and was signed by the former Attorney-General of the Federation, Mr Mohammed Adoke, for Nigeria.

He stated that the United Kingdom had commenced the return of some prisoners to Nigeria and had recently initiated application for transfer of more prisoners based on the agreement.

Ekweremadu expressed concern that Section 12(1) of the 1999 Constitution had not been complied with, saying that the agreement was not subjected to legislative enactment and as such not in force.

“The provisions of Section 12(1) of the Constitution state that no treaty between the federation and any other country shall have the force of law.

“This is with the exception to do all that is necessary to ensure successful implementation of the agreement by following the essential internal constitutional and legal procedures required.

“It is disturbing that the British National Offender Management Service may be under a misinformed impression that all internal procedures have been completed, warranting the entry into force of the agreement on Sept. 29, 2014,’’ he said.

The deputy president of the senate lamented that certain provisions of the agreement had been deemed to be in breach of the fundamental human rights of the prisoners being transferred.

According to him, where a prisoner’s right to consent is taken away as is the nature of the agreement, it violates basic tenets of fundamental human rights.

Supporting the motion, Chairman, Senate Committee on Foreign affairs, Sen. Monsurat Sunmonu, said it was important for the issue to be resolved as soon as possible to protect the rights of prisoners.

She expressed concern that it was not clear if Nigeria’s Ambassador to the UK was contacted to confirm if the prisoners being repatriated were Nigerians.

“I used to work for Immigration in the UK so I know how this works.

“On February 15, 2015, I sent a letter to the Ministry of Justice to send to us the list of bilateral and multilateral agreements entered into between 1999 and 2017.

“From the report we got, 321 agreements are being looked into, while 93 have been signed but not ratified. We have to do more work to look into it.

“Also, in May 2016, I went with the Minister of Foreign Affairs to the UK to discuss on immigration,’’ she said.

Sen. James Manager (PDP-Delta) said that the motion was timely in view of the need for Nigeria to do the right thing.

According to him, the confusion emanating from the agreement needs to be tackled to protect the rights of Nigerian prisoners.

“I am happy about this motion. The ratification has not been done but the UK has been sending prisoners of Nigerian origin back to Nigeria while we have not done same.

“We need to mount pressure on the executive to bring all agreements entered into for us to look into critically and then ratify,’’ he said.

In his remarks, President of the Senate, Dr Bukola Saraki, said that there was the need to ensure that constitutional requirements were fully complied with.

He added that the committee should respect the time frame and report back to senate in one month “so that we can take a final decision’’.

Tags:   Attorney General of the Federation   The Senate