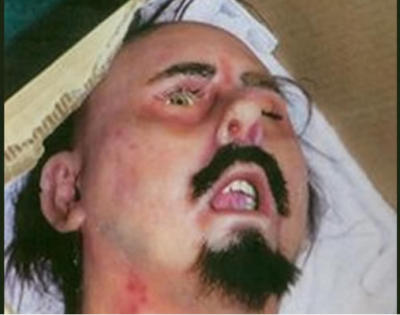 A woman who suspected that her husband was cheating with the wife of their family friend took matters into her own hands by slashing off his manhood, The Daily Mail reports.

Thirty-two-year-old Betitta believed that her husband, Mark, was carrying out his affair at the building where he worked.

So, when the man slept off at a friend’s place after some drinks, his wife was able to find him for the sole purpose of grabbing and chopping off his penis “two inches from the base.”

She then fled, but was later apprehended and arrested, The Daily Mail reports.

She told Police she did not regret what she did.

“I don’t regret cutting off his penis. It’s his punishment for being a womaniser. I am ready to face the consequences of my actions,” she said, .

“I am tired of his womanising. He got a new girlfriend lately.”

According to reports, the couple were always arguing, though they have three kids together and had been married for about 12 years.

The man’s friends rushed him to the nearest hospital, from where he was transferred to a medical centre, but surgeons were unable to reattach his penis.

The surgeons said there was nothing they could do since the major nerve had been severed, and tissue from the area that was cut off was dead.

The man vowed to press charges against his wife.

The incident happened in the Philippines.