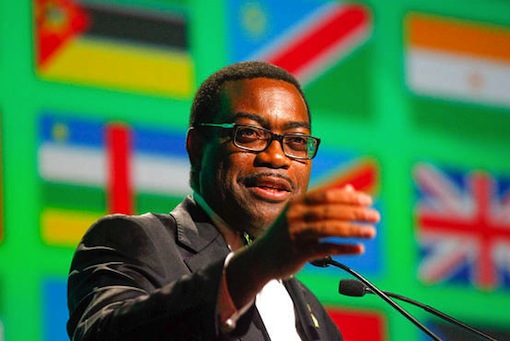 A statement issued in Abuja on Wednesday by Jennifer Patterson, AfDB Acting Director, Communications and External Relations, said Adesina made the remark at the Centre for Global Development in Washington.

Adesina said that the bank’s vision for Africa was encapsulated in the High 5s.

“They are to “Light up and power Africa, Feed Africa, Industrialize Africa, Integrate Africa and Improve the quality of life for the people of Africa”.

“Our goal is to connect 130 million people to the grid, 75 million via off grids and provide some 150 million with clean cooking energy.

“We have set up a whole new Vice Presidency just for Power and Energy; the first and only Multilateral Development Bank to do so.

He said that just as electricity powers an economy, so does food provide energy for people.

According to Adesina, Africa’s annual food import bill of 35 billion dollars, estimated to rise to 110 billion dollars by 2025, “weakens African economies, decimates its agriculture and exports jobs from the continent’’.

He also said that the bank had prioritized agriculture to rapidly support Africa to diversify its economies and revive its rural areas.

He said that the bank had committed 24 billion dollars towards agriculture in the next 10 years with a sharp focus on food self-sufficiency and agricultural industrialisation.

Adesina, however, said that the bank was planning to deploy 1.1 billion dollars following board approval to address the crisis and ensure that drought did not lead to famine.

He also said that the bank was taking action to level the playing field for women in Africa by launching the Affirmative Finance Action for Women in Africa (AFAWA) with the goal of mobilising three billion dollars for women entrepreneurs.

Adesina also said that to tackle the issue of high youth unemployment rates, the bank had launched the Empowering Novel Agri-Business-Led Employment (ENABLE) Youth initiative for young ‘Agripreneurs’ in several countries, including Nigeria and Sudan.

He said the bank had partnered with the European Investment Bank to launch the Boost Africa Initiative for young innovative entrepreneurs.

He said that it was also investing in training for young people in science, technology and mathematics to prepare them for the jobs of the future.

Outlining some other achievements of the bank on the continent, he said that 3.3 million Africans had benefitted from new electricity connections, while 3.7 million also benefited from improved access to water and sanitation.

“The African Development Bank is delivering for Africa and it has the capacity to deliver more for Africa.