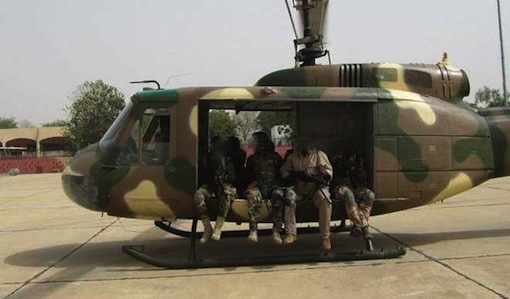 The Nigerian Air Force (NAF) Component of Operation “LAFIYA DOLE” says it has neutralised a gathering of insurgents in parts of the North East.

The air forced said that it conducted an air interdiction mission on some remnants of the insurgents in a village 3.42 km North East of Mangosum, Borno.

The Director of Public Relations and Information, Air Commodore Olatokunbo Adesanya, said this in a statement issued on Tuesday in Abuja.

Adesanya said NAF had successfully provided air cover to troops of 27 Task Force Battalion thereby enabling them to repel an attack by the insurgents.

According to him, a NAF Intelligence, Surveillance and Reconnaissance aircraft trailed the remnants of the insurgents that attacked the Battalion earlier to a village near Mangosum.

“Following which NAF conducted the air interdiction mission with two Alpha Jets and one F-7Ni aircraft.

“Battle Damage Assessment conducted after the strike showed that several leaders of the insurgents’ organisation and their followers were killed during the attacks.

“A sizeable cache of weapons and equipment were destroyed with the successful air interdiction,” he said.

The director said NAF was able to frustrate yet another attempt by the remnants to regroup in the Sambisa general area.

The News Agency of Nigeria (NAN) recalls that the insurgents suffered a serious casualty on April 28, in the hands of NAF in the North East region.