35 Die In Mine Blast 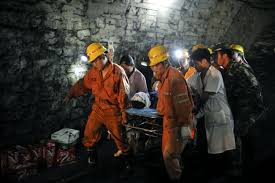 The death toll in a coal mine explosion in northern Iran rose to 35 on Thursday, the country’s labour minister said, as hopes of finding further survivors dwindled.

The disaster at the Zemestanyurt mine in Golestan province occurred on Wednesday, reportedly trapping up to 80 miners underground at a depth of about 1,800 metres.

The Labour Minister, Ali Rabii said that among those killed were workers who rushed to the aid of their colleagues but perished when a tunnel collapsed, the semi-official Fars news agency reported.

Authorities said the explosion occurred after a build-up of methane gas.

News report stated that more than a dozen injured people were transferred to hospital after the blast which occurred at 12:45 p.m. local time in the Zemestanyurt coal mine in Golestan province.

Iran extracted 1.68 million tons of coal in 2016, an increase on previous years, thanks to easing of international sanctions.

The country exports only a fraction of the coal and uses most of it in domestic steel production.