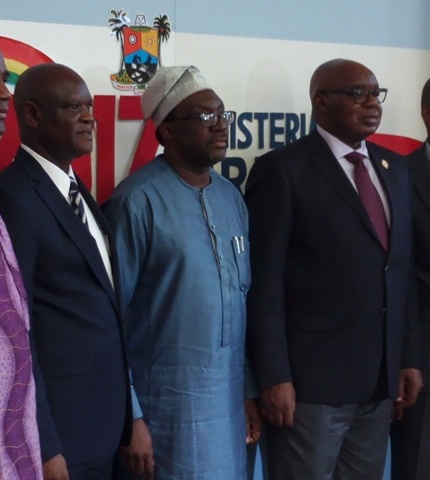 L-R: Permanent Secretary, Dr. Olajide Bashorun; Commissioner for Information and Strategy, Steve Ayorinde and the Commissioner for Wealth Creation and Employment, Babatunde Durosimi-Etti during the ministerial press conference on Thursday.

The Lagos State Government has approved the sum of N1.76 billion for 1,401 applicants who applied for fund to develop their enterprises as part of the N25 billion Employment Trust Fund, ETF.

Commissioner for Wealth Creation and Employment, Babatunde Durosimi-Etti disclosed this on Thursday at a ministerial press conference in Alausa, Lagos, Southwest Nigeria.

He said the approval was in fulfillment of its mandate in wealth creation to get many young entrepreneurs productively engaged.

In his words: “The fund received 3,758 applications (2,304 MEs and 1,454 SMEs) in the first batch of the pilot project. The board approved 705 applicants (517 MEs and 188 SMEs) totaling N900, 137,078. The first beneficiaries were presented their offer letters recently. Each of the beneficiaries in the pilot phase received cheques ranging from N50, 000.00 to N5 million to grow and enhance their business and create jobs.

“For the in the second batch of the pilot project, the Fund received 1,937 applications (1,505 MEs and 432 SMEs). Out of these, the board approved 696 applicants (495 MEs and 201 SMEs) totaling N855, 338,037. The successful applicants have been contacted to meet the conditions that precede the disbursement of their loans. In fulfillment of the Lagos state mandate in wealth creation the fund has approved loans totaling N1.76 billion for 1, 401 beneficiaries.”

The commissioner also said as part of efforts to eradicate unemployment in the State, the government had unveiled a platform tagged: “Graduate Internship Scheme” to give interns an opportunity to develop employability skills which are vital in securing employment.

He said the programme, which is an initiative of the State Ministry of Wealth Creation and Employment (MWCE), was also aimed at entrepreneurship development through establishment and promotion of business to create sustainable wealth and employment.

Durosinmi-Etti said that the scheme, planned to be a 3-month paid internship scheme for 2000 recent graduates with a minimum of one-year post-N.Y.S.C, would help the interns to gain valuable applied work experience, build up their professional network and expose them to possible niche entrepreneurial opportunities.

The Commissioner also stated that the government, through the Lagos State Employment Trust Fund (LSETF) had continued to create wealth and employment.

“The fund which is focused on providing financial support to Micro, Small and Medium Enterprises (MSMES) in Lagos has approved loans totalling N1.76 billion to 1,401 applicants in micro, small and medium scale enterprises”.

Durosinmi-Etti further stated that an alliance has been built with the young entrepreneurs to create jobs and support their innovation, adding that the Ministry is also collaborating with West Africa Vocational Education Academy (WAVE) to train unemployed youths on employable skills and job opportunities for three weeks.

He said the training was designed to equip the unemployed with soft skills and prepare them for entry-level jobs within the hospitality, wholesale and retail sectors.