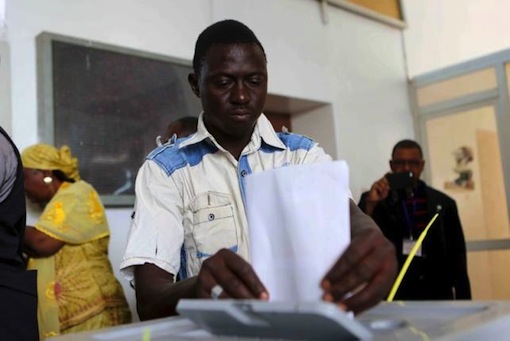 A voter casts his ballot at a polling station during the country's presidential and legislative elections in Niamey, Niger, February 21, 2016.
Photo: Reuters

A member of the All Progressives Congress (APC) in Surulere area of Lagos State, Mr Afeez Kasunmu, on Thursday urged Lagos residents to elect only candidates that were ready to work with the people into office in the July 22 local government election in the state.

Kasunmu, a chairmanship aspirant in the council area, told the newsmen in Lagos that leaders, especially at the grassroots, must be passionate about the plight and welfare of the people.

The former Secretary to the Local Government said that the welfare of the people and security remained the primary responsibility of any leader in government.

“Government at the grassroots must listen to the yearnings and demands of the people and find ways to actualise them.

“We need to be taking everything back to the drawing board with the people. We need to develop people from the grassroots.

“It is not good to sit in our offices not knowing what happens in various CDCs and CDAs, not inviting the people concerned —  the immediate community, to ask what are their needs,” Kasunmu said.

The aspirant said that if the party leaders and the people gave him the opportunity to serve as the chairman of the council, he would be committed to their needs.

According to him, no decision affecting communities should be taken without recourse to the people.

Kasunmu, who noted that he had made three attempts to the top council position, said there were many things to fix in Surulere.

“I am coming to make Surulere a home for all, where everybody will belong and benefit from whatever comes from the government.

“I have seen the local government in and out, so I know what it is to be a chairman in Surulere Local Government,” he said.

The aspirant urged party stakeholders to ensure that experienced and capable candidates are fielded in the election.

The News Agency of Nigeria (NAN) reports that the Lagos State Independent Electoral Commission (LASIEC) has fixed July 22 for election into 20 Local Government and 37 Local Council Development Areas in the state.