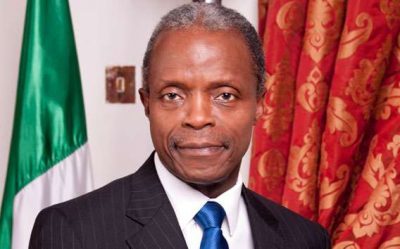 Vice President Yemi Osinbajo on Thursday urged Christians to persevere in their faith in order to live the life that Christ chose for them.

Prof. Osinbajo gave the charge at the celebration of the 50th anniversary of the St. Augustine’s Major Seminary, Jos.

“And so, I ask that we follow the difficult, sometimes painful path that our faith dictates.

“And we are conquerors because Christ has already conquered the world.’’

Osinbajo recalled Christ’s injunction that Christians are the salt of the earth and the light of the world.

He said a seminarian’s place of leadership was a sacrificial one which might come with pain and humiliation or persecution of serving without being served.

The Vice President also told Christians to live out the injunctions of Christ by not only loving their enemies but also not responding to attacks or persecution.

He urged them to treat everyone decently and not revenge in the face of attacks.

According to him, the destiny of all nations depends on the church adding “this is a spiritual principle of great importance.’’

“Christ said that you and I are the salt of the earth, the light of the world.

“This place of leadership is a sacrificial one.

“Indeed as Christ said “let it not be said among us for those who deserve to be great shall be servants and whoever of us who deserves to be first shall be slave of all,’’ he said.

The Vice President also reaffirmed the commitment of President Muhammadu Buhari to the freedom of worship and also the responsibilities of the state to the people.

“The President has expressed his firm views on the freedom of worship and also the responsibilities of the state to the people and to all religions.

“I want to say that he remains firmly committed to those principles that he enunciated that day before the Catholic bishops.

“And God helping us we will ensure that we abide by those principles that he enunciated.’’

Osinbajo hailed the remarkable achievements of the Seminary having produced no fewer than 1,500 priests with 20 Bishops and two Arch Bishops in its 50 years of existence.

The Minister of Agriculture and Rural, Chief Audu Ogbe, who chaired the ceremony, noted that the Catholic Church had been in the forefront of education in the country.

He added that the Church was also leading in the provision of health facilities and rural development.

Represented by Gov. Darius Ishaku of Taraba, the minister said the church had also provided the society with people of morals and good character.

He said that there was the need to secure the peace in the country and build harmony among the people.

The vice president expressed the desire of the Federal Government to encourage local manufacturers to improve the economy.

He noted the successes of the administration on ease of doing business, adding that more incentives would be granted to manufacturers to produce made-in-Nigeria goods.

According to him, by June all facilities at the Corporate, adding that the administration had reduced the number of import documents by half to save time.

Osinbajo noted that there was now only one point of inspection of imports led by the Nigeria Customs Service.

The vice president added that the time for acquisition of Certificate of Occupancy nationwide would be drastically reduced to attract foreign investors.