APC has no factions C’River – Chairman 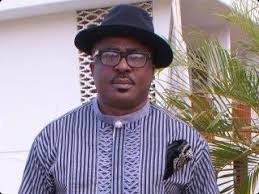 National Vice Chairman (South-South) of the All Progressive Congress (APC), Mr Hillard Eta, says there is no faction in the party in Cross River.

Eta said this in Calabar on Friday in an interview with the News Agency of Nigeria (NAN).

He said that the inability to fill the chairmanship position in the state vacated by Minister of Niger Delta Affairs, Mr Usani Uguru, did not translate to crisis in the state as being speculated.

Eta said: “we do not have any faction in APC in Cross River. It is wrong to say that the minister and I do not see eye-to-eye.

“The minister and I are political associates. We have never been enemies, but that is not to say that we cannot disagree on policies.

“Therefore, it cannot be imagined that these kinds of people cannot have disagreements bordering on policy issues.

“Disagreement does not mean factionalism. One of the pillars of democracy and politics is the capacity for crisis management and resolution.

“So what gives anyone the impression that APC in Cross River is in factions. The word factionalism has been bandied around for too long without anyone caring to ask the actual meaning of the word.

“All the noise about factionalism in the party is the handiwork of the dying PDP. They are looking for who they will die with.’’

According to him, the APC is intact and mobilising for the forthcoming local government election in the state and for 2019.

The chairman described the recent defection of some prominent members of the PDP to APC in the state as “good omen’’, adding that rather than cause friction, it would strengthen the party.

“Our arms are always wide open to welcome every new member to APC, especially in Cross River. The Constitution of Nigeria guarantees freedom of association.

“We cannot stop anyone interested to come to APC, because after all, this will be the first time in the state for people of Cross River to join the progressives, ‘’ he stated.

He debunked the allegations that many of the defectors to the APC were those found to be corrupt, maintaining that it was mere blackmail.

Eta challenged the ruling Peoples Democratic Party (PDP) in the state to show proof of their achievements in the past two years.

“I challenge the PDP-led government to tell Cross River people what it has done with all the bailout funds that it has so far collected from the Federal Government.

“The government should tell the people of Cross River how much it has collected and specific projects it has spent the money on, ‘’ he said.