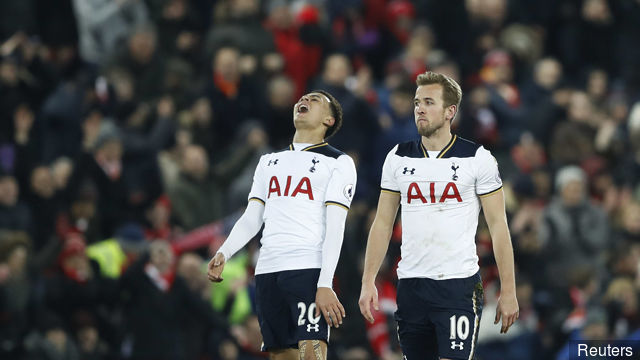 Spurs could have narrowed the gap to a point with victory at London Stadium, but were well below par as the Hammers helped Chelsea close on the title.

Hammers keeper Adrian made first-half saves from Harry Kane and Eric Dier before Lanzini smashed in a loose ball.

Chelsea need two wins from their final four games to be crowned champions.

Tottenham must hope the Blues slip up in a favourable-looking run-in, which includes home games against three sides in the bottom seven.

Antonio Conte’s side will secure the title on Friday, 12 May if they beat both Middlesbrough and West Brom.

The Spurs players looked disconsolate as they trudged off the pitch, their heads bowed, while their West Ham counterparts – and the home fans – took great delight in harming their neighbours’ title ambitions.

Tottenham made the short trip to east London knowing they could heap pressure on Chelsea before their game against Middlesbrough on Monday.

Mauricio Pochettino’s side were going for a 10th straight Premier League win, and headed into the game boosted by a 2-0 win against arch-rivals Arsenal last weekend.

But they lacked invention against a well-drilled West Ham side, who won against one of the top eight sides for the first time in 15 attempts this season.

Spurs had scored 71 goals in their previous 34 league games, a tally bettered only by Chelsea, but only briefly tested Adrian with two quick-fire efforts in the first half.

Once the Hammers went ahead through Lanzini, the confidence of the visitors appeared to sap.

Spurs trailed 2-1 against the Hammers after 89 minutes at White Hart Lane earlier in the season, only to win 3-2. That never looked like happening at a raucous London Stadium.

Their attacks lacked conviction, only Christian Eriksen going close with a 25-yard effort which flew past the right-hand post, as West Ham saw out the final few minutes to seemingly ruin Spurs’ quest for a first title since 1961.

“We are still fighting,” said Pochettino. “We must wait but it is now more difficult.”